We have searched for business suppliers in Abingdon, Oxfordshire a town with an approximate population of 38,262 , that at the census in 2011 had a working population (aged between 16 and 74) of 21,140 people in work, and have found 7 suppliers of services such as Wall Art, , Accountants & Tool Suppliers in Abingdon and have listed them below split into the type of service that they provide.

If you know of any more suppliers of business related services, either matching the list of 3 services we already have or new services, in Abingdon that you can recommend please contact us and we will look at adding them to this page.

Accountants based in Abingdon

Certax Accounting Oxfordshire (South)
I have owned and managed the South Oxfordshire office since 2002 and have built up a wide portfolio of clients in the area including business start ups, established sole traders and partnerships and small Ltd companies. I also provide a self assessment tax return service for private clients. ( Last Checked/Updated : 2020-05-02 01:17:01)

Wenn Townsend
Wenn Townsend are a firm of traditional but modern accountants that combine the age-old ways of servicing customers with a personal touch whilst combining modern working practices. ( Last Checked/Updated : 2017-03-26 00:18:22)

Screwfix
Screwfix is the UK's largest multi channel supplier of Trade Tools, Plumbing, Electrical, Bathrooms and Kitchens. With over 30 years experience in the industry, we dispatch tens of thousands of parcels every week for next day and weekend delivery to tradesmen, handymen and serious DIY enthusiasts all over the UK. ( Last Checked/Updated : 2019-11-25 21:27:33)

A Quarter Of - the old fashioned sweetshop on the Internet!, reward your staff or business clients with the taste and memories of their youth. From individual packs of sweets to mixed gift boxes. (Last Checked : 2020-08-08 16:21)

Not found what you are looking for in Abingdon? We have other listings in locations such as Faringdon, Dorchester, Slough & High Wycombe that you may find helpful.

Abingdon-on-Thames (/ˈæbɪŋdən/ AB-ing-dən), known just as Abingdon between 1974 and 2012, is a historic market town and civil parish in the ceremonial county of Oxfordshire, England. Historically the county town of Berkshire, since 1974 Abingdon has been administered by the Vale of White Horse district within Oxfordshire.

The area was occupied from the early to middle Iron Age and the remains of a late Iron Age and Roman defensive enclosure lies below the town centre. Abingdon Abbey was founded around 676, giving its name to the emerging town. In the 13th and 14th centuries, Abingdon was an agricultural centre with an extensive trade in wool, alongside weaving and the manufacture of clothing. Charters for the holding of markets and fairs were granted by various monarchs, from Edward I to George II. The town survived the dissolution of the abbey in 1538, and by the 18th and 19th centuries, with the building of Abingdon Lock in 1790, and Wilts & Berks Canal in 1810, was a key link between major industrial centres such as Bristol, London, Birmingham and the Black Country. In 1856 the Abingdon Railway opened, linking the town with the Great Western Railway at Radley. The Wilts & Berks Canal was abandoned in 1906 but a voluntary trust is now working to restore and re-open it. Abingdon railway station was closed to passengers in September 1963. The line remained open for goods until 1984, including serving the MG car factory, which operated from 1929 to October 1980. Abingdon's brewery, Morland, whose most famous ale, Old Speckled Hen, was named after an early MG car, was taken over and closed down by Greene King Brewery in 1999, with production moving to Bury St Edmunds in Suffolk. The site of the brewery has been redeveloped into housing. The rock band Radiohead formed in 1985 when studying at Abingdon School.

The above introduction to Abingdon uses material from the Wikipedia article 'Abingdon' and is used under licence.

Weather forecast for the next three days for Abingdon 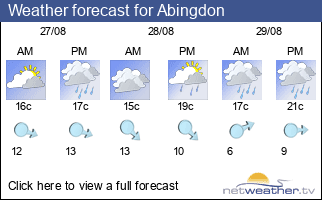