We have searched for business suppliers in Bracknell, Berkshire a town with an approximate population of 77,256 , that at the census in 2011 had a working population (aged between 16 and 74) of 42,574 people in work, and have found 5 suppliers of services such as Wall Art, , Accountants, Local Authority, Opticians & Printers in Bracknell and have listed them below split into the type of service that they provide.

If you know of any more suppliers of business related services, either matching the list of 5 services we already have or new services, in Bracknell that you can recommend please contact us and we will look at adding them to this page.

Kevin Beare and Co
In the Thames Valley we operate from a suite of offices in Bracknell, Royal Berkshire, at the heart of the "Silicon Valley" in England. Bracknell is home to many household names such as Dell, Novell, Hewlett Packard, Fujitsu, Oracle, Panasonic and Siemens.

Kall Kwick Printers
Whatever your design, printing or e-communications requirements - no matter how large or small. Your local Kall Kwik is the friendly, local team that offers the widest range of services on your doorstep.

John Mitchell - Photo4Me
Wall art suitable for interior design and office receptions, available online and shipped to Bracknell. Printed to order on canvas, acrylic and other surfaces with 30 day guarantee.

Not found what you are looking for in Bracknell? We have other listings in locations such as Newbury, Aldermaston, Reading, Wokingham, Ascot, Egham, Staines, Ashford, Walton-on-Thames, Feltham, Sunbury, Whitton, Hampton, East Molesey, Twickenham, Teddington, Thames Ditton, Surbiton, Kingston upon Thames, New Malden, Morden, Wimbledon, Mitcham & Tooting that you may find helpful.

Bracknell (/ˈbræknəl/) is a large town and civil parish in Berkshire, England, the westernmost area within the Greater London Urban Area and the administrative centre of the Borough of Bracknell Forest. It lies 11 miles (18 km) to the east of Reading, 9 miles (14 km) south of Maidenhead, 10 miles (16 km) southwest of Windsor and 34 miles (55 km) west of central London.

Originally a market village and part of the Windsor Great Forest, Bracknell experienced a period of huge growth during the mid-20th Century when it was declared a New Town. Planned at first for a population of 25,000, Bracknell New Town was further expanded in the late 1960s to accommodate a population of 60,000. As part of this expansion, Bracknell absorbed many of the surrounding hamlets including Easthampstead, Ramslade and Old Bracknell. As of 2018, Bracknell has an estimated population of around 84,000. It is a commercial centre and the UK headquarters for several technology companies.

The above introduction to Bracknell uses material from the Wikipedia article 'Bracknell' and is used under licence.

Weather forecast for the next three days for Bracknell 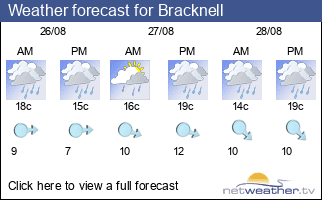