We have searched for business suppliers in Bramhall, Stockport a town with an approximate population of 17,436 , that at the census in 2011 had a working population (aged between 16 and 74) of 8,064 people in work, and have found 2 suppliers of services such as Wall Art, & Accountants in Bramhall and have listed them below, we hope to add more in the near future.

If you know of any more suppliers of business related services, either matching the list of 2 services we already have or new services, in Bramhall that you can recommend please contact us and we will look at adding them to this page.

Castletree
Accountancy in Bramhall - Castletree are a firm of Chartered Certified Accountants and Business Advisers based in Bramhall.

John Mitchell - Photo4Me
Wall art suitable for interior design and office receptions, available online and shipped to Bramhall. Printed to order on canvas, acrylic and other surfaces with 30 day guarantee.

Not found what you are looking for in Bramhall? We have other listings in locations such as Widnes, Runcorn, Warrington, Paddington, Hale, Altrincham, Wilmslow, Cheadle, Poynton & Whaley Bridge that you may find helpful.

Bramhall is a suburb in the Metropolitan Borough of Stockport, England. Historically in Cheshire, it had a population of 17,436 at the 2011 Census. In 2008, Bramhall was named 'Britain's Friendliest Village' in the BBC's Changing UK report and in 2011 was named 'Cheshire's Culinary Capital' by Cheshire Life Magazine.

The manor of Bramall dates from the Anglo-Saxon period, when it was held as two separate estates by two Saxon freemen, Brun and Hacun. In 1070, William the Conqueror subdued the north-west of England, and divided the land among his followers. The manor of "Bramale" was given to Hamon de Massey, who eventually became the first Baron of Dunham Massey. The earliest reference to Bramall was recorded in the Domesday Book as "Bramale", a name derived from the Old English words brom meaning broom, both indigenous to the area, and halh meaning nook or secret place, probably by water. De Masci received the manor as wasteland, since it had been devastated by William the Conqueror's subdual. By the time of the Domesday survey, the land was recovering and cultivated again.

The above introduction to Bramhall uses material from the Wikipedia article 'Bramhall' and is used under licence.

Weather forecast for the next three days for Bramhall 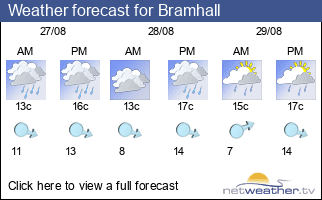