We have searched for business suppliers in Brecon, Powys a town with an approximate population of 8,250 , that at the census in 2011 had a working population (aged between 16 and 74) of 3,793 people in work, and have found 2 suppliers of services such as Wall Art, & Accountants in Brecon and have listed them below, we hope to add more in the near future.

If you know of any more suppliers of business related services, either matching the list of 2 services we already have or new services, in Brecon that you can recommend please contact us and we will look at adding them to this page.

Mitchell Meredith
Our real expertise is working with the owners/directors/partners of small and medium-sized businesses. We also have specific expertise working within the farming industry.

John Mitchell - Photo4Me
Wall art suitable for interior design and office receptions, available online and shipped to Brecon. Printed to order on canvas, acrylic and other surfaces with 30 day guarantee.

Not found what you are looking for in Brecon? We have other listings in locations such as Battle that you may find helpful.

Brecon (/ˈbrɛkən/; Welsh: Aberhonddu pronounced [ˌabɛrˈhɔnðɪ]), archaically known as Brecknock, is a market and minster town in Powys, mid-Wales. In 1841, it had a population of 5,701. The population in 2001 was 7,901, increasing to 8,250 at the 2011 census. Historically it was the county town of Brecknockshire (Breconshire); although its role as such was eclipsed with the formation of the County of Powys, it remains an important local centre. Brecon is the third-largest town in Powys, after Newtown and Ystradgynlais. It lies north of the Brecon Beacons mountain range, but is just within the Brecon Beacons National Park.

The Welsh name, Aberhonddu, means "mouth of the Honddu". It is derived from the River Honddu, which meets the River Usk near the town centre, a short distance away from the River Tarell which enters the Usk a few hundred metres upstream. After the Dark Ages the original Welsh name of the kingdom in whose territory Brecon stands was (in modern orthography) "Brycheiniog", which was later anglicised to Brecknock or Brecon, and probably derives from Brychan, the eponymous founder of the kingdom.

The above introduction to Brecon uses material from the Wikipedia article 'Brecon' and is used under licence.

Weather forecast for the next three days for Brecon 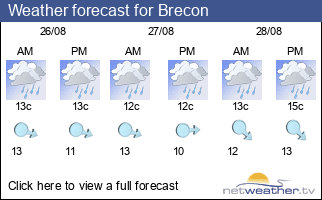