We have searched for business suppliers in Broadstairs, Kent a town with an approximate population of 23,632 , that at the census in 2011 had a working population (aged between 16 and 74) of 9,944 people in work, and have found 2 suppliers of services such as Wall Art, Business Gifts & Accountants in Broadstairs and have listed them below, we hope to add more in the near future.

If you know of any more suppliers of business related services, either matching the list of 3 services we already have or new services, in Broadstairs that you can recommend please contact us and we will look at adding them to this page.

Levicks
Levicks are a firm of accountants based in Broadstairs, Maidstone and Canterbury in Kent. Our aim is to provide the highest standards of professional service and advice to all. ( Last Checked/Updated : 2022-03-14 16:49:01)

A Quarter Of - the old fashioned sweetshop on the Internet!, reward your staff or business clients with the taste and memories of their youth. From individual packs of sweets to mixed gift boxes. (Last Checked : 2022-05-23 15:24)

Not found what you are looking for in Broadstairs? We have other listings in locations such as Hampton, Margate & Ramsgate that you may find helpful.

Broadstairs is a coastal town on the Isle of Thanet in the Thanet district of east Kent, England, about 80 miles (130 km) east of London. It is part of the civil parish of Broadstairs and St Peter's, which includes St Peter's, and had a population in 2011 of about 25,000. Situated between Margate and Ramsgate, Broadstairs is one of Thanet's seaside resorts, known as the "jewel in Thanet's crown". The town's coat of arms's Latin motto is Stella Maris ("Star of the Sea"). The name derives from a former flight of steps in the chalk cliff, which led from the sands up to the 11th-century shrine of St Mary on the cliff's summit.

The town spreads from Haine Road in the west to Kingsgate (named after the landing of King Charles II in 1683), a hamlet in St Peter parish in the north, and to Dumpton in the south (named after the yeoman Dudeman who farmed there in the 13th century). The hamlet of Reading (formerly Reden or Redyng) Street was established by Flemish refugees in the 17th century.

The above introduction to Broadstairs uses material from the Wikipedia article 'Broadstairs' and is used under licence.

Weather forecast for the next three days for Broadstairs 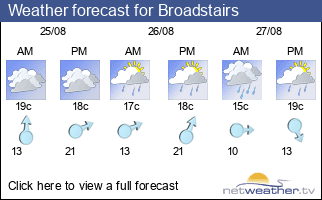