We have searched for business suppliers in Caernarfon, Gwynedd a town with an approximate population of 9,493 , that at the census in 2011 had a working population (aged between 16 and 74) of 4,300 people in work, and have found 4 suppliers of services such as Wall Art, , Accountants & Financial Advice in Caernarfon and have listed them below split into the type of service that they provide.

If you know of any more suppliers of business related services, either matching the list of 3 services we already have or new services, in Caernarfon that you can recommend please contact us and we will look at adding them to this page.

Owain Bebb a'i Gwmni
First set up by Owain Bebb (1940 – 2003) in 1974, Owain Bebb a'i Gwmni has been operating in the Caernarfon and Pwllheli area for over 40 years. The company has had a presence in Cerrig y Drudion since the 1980s, Cardiff more recently and the expansion to the Aberystwyth office in May 2016.

Financial Advice based in Caernarfon

75point3 Ltd
75point3 is a client focused firm of professionally qualified, dedicated and experienced advisers which provides high quality independent advice on Investments, Pensions, Life Assurance and Mortgages. We offer our expertise directly to individual clients and businesses from our offices across North Wales and Chester.

John Mitchell - Photo4Me
Wall art suitable for interior design and office receptions, available online and shipped to Caernarfon. Printed to order on canvas, acrylic and other surfaces with 30 day guarantee.

Not found what you are looking for in Caernarfon? We have other listings in locations such as Llanrwst that you may find helpful.

Caernarfon (/kərˈnɑːrvən/; Welsh: [kaɨrˈnarvɔn] (listen)) is a royal town, community, and port in Gwynedd, Wales, with a population of 9,852 (With Caeathro). It lies along the A487 road, on the eastern shore of the Menai Strait, opposite the Isle of Anglesey. The city of Bangor is 8.6 miles (13.8 km) to the north-east, while Snowdonia fringes Caernarfon to the east and south-east. Carnarvon and Caernarvon are Anglicised spellings that were superseded in 1926 and 1974 respectively. The town is also noted for its high percentage of native Welsh speakers. Due to this, Welsh is the predominant language of the town.

Abundant natural resources in and around the Menai Strait enabled human habitation in prehistoric Britain. The Ordovices, a Celtic tribe, lived in the region during the period known as Roman Britain. The Roman fort Segontium was established around AD 80 to subjugate the Ordovices during the Roman conquest of Britain. The Romans occupied the region until the end of Roman rule in Britain in 382, after which Caernarfon became part of the Kingdom of Gwynedd. In the late 11th century, William the Conqueror ordered the construction of a motte-and-bailey castle at Caernarfon as part of the Norman invasion of Wales. He was unsuccessful, and Wales remained independent until around 1283.

The above introduction to Caernarfon uses material from the Wikipedia article 'Caernarfon' and is used under licence.

Weather forecast for the next three days for Caernarfon 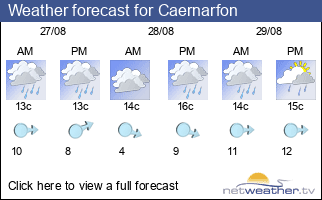