We have searched for business suppliers in Carmarthen, Dyfed a town with an approximate population of 15,854 , that at the census in 2011 had a working population (aged between 16 and 74) of 7,065 people in work, and have found 3 suppliers of services such as Wall Art, & Accountants in Carmarthen and have listed them below split into the type of service that they provide.

If you know of any more suppliers of business related services, either matching the list of 2 services we already have or new services, in Carmarthen that you can recommend please contact us and we will look at adding them to this page.

Clayshaw Butler
Clay Shaw Butler Chartered Accountants are a firm of Accountants based in Carmarthen and with clients throughout the surrounding area. ( Last Checked/Updated : 2021-05-23 15:37:02)

A Quarter Of - the old fashioned sweetshop on the Internet!, reward your staff or business clients with the taste and memories of their youth. From individual packs of sweets to mixed gift boxes. (Last Checked : 2021-08-02 13:06)

Not found what you are looking for in Carmarthen? We have other listings in locations such as Whitland that you may find helpful.

Carmarthen (/kɑːrˈmɑːrðən/, RP: /kəˈmɑːðən/; Welsh: Caerfyrddin [kɑːɨrˈvərðɪn], "Merlin's fort" or "Sea-town fort") is the county town of Carmarthenshire and a community in Wales, lying on the River Towy. 8 miles (13 km) north of its estuary in Carmarthen Bay. The population was 14,185 in 2011, down from 15,854 in 2001, but gauged at 16,285 in 2019. It has a claim to be the oldest town in Wales – Old Carmarthen and New Carmarthen became one borough in 1546. It was the most populous borough in Wales in the 16th–18th centuries, described by William Camden as "chief citie of the country". Growth stagnated by the mid-19th century as new settlements developed in the South Wales Coalfield.

When Britannia was a Roman province, Carmarthen was the civitas capital of the Demetae tribe, known as Moridunum ("Sea Fort"). It is possibly the oldest town in Wales, recorded by Ptolemy and in the Antonine Itinerary. The Roman fort is believed to date from about AD 75. A Roman coin hoard was found nearby in 2006. Near the fort is one of seven surviving Roman amphitheatres in Britain and only two in Roman Wales (the other being at Isca Augusta, Roman Caerleon). Excavated in 1968, the Carmarthen fort has an arena of 50 by 30 yards (about 46 by 27 metres); the cavea (seating area) is 100 by 73 yards (92 by 67 metres). Veprauskas has argued for identifying it as the Cair Guorthigirn ("Fort Vortigern") listed by Nennius among the 28 cities of Britain in his History of the Britons. Evidence of the early Roman town has been investigated for several years, revealing urban sites likely to date from the 2nd century.

The above introduction to Carmarthen uses material from the Wikipedia article 'Carmarthen' and is used under licence.

Weather forecast for the next three days for Carmarthen 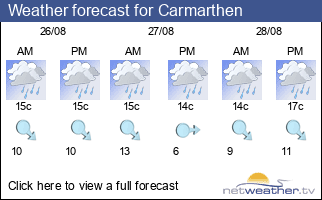