We have searched for business suppliers in Cheapside, London a town with an approximate population of 773 , that at the census in 2011 had a working population (aged between 16 and 74) of 346 people in work, and have found 2 suppliers of services such as Wall Art, & Opticians in Cheapside and have listed them below, we hope to add more in the near future.

If you know of any more suppliers of business related services, either matching the list of 2 services we already have or new services, in Cheapside that you can recommend please contact us and we will look at adding them to this page.

John Mitchell - Photo4Me
Wall art suitable for interior design and office receptions, available online and shipped to Cheapside. Printed to order on canvas, acrylic and other surfaces with 30 day guarantee.

Cheapside is a street in the City of London, the historic and modern financial centre of London, which forms part of the A40 London to Fishguard road. It links St. Martin's Le Grand with Poultry. Near its eastern end at Bank junction, where it becomes Poultry, is Mansion House, the Bank of England, and Bank station. To the west is St. Paul's Cathedral, St. Paul's tube station and square.

In the Middle Ages, it was known as Westcheap, as opposed to Eastcheap, another street in the City, near London Bridge. The boundaries of the wards of Cheap, Cordwainer and Bread Street run along Cheapside and Poultry; prior to boundary changes in 2003 the road was divided amongst Farringdon Within and Cripplegate wards in addition to the current three.

The above introduction to Cheapside uses material from the Wikipedia article 'Cheapside' and is used under licence.

Weather forecast for the next three days for Cheapside 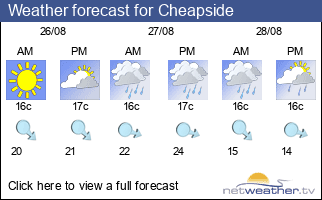