We have searched for business suppliers in Dagenham, Essex , that at the census in 2011 had a working population (aged between 16 and 74) of 75,217 people in work, and have found 2 suppliers of services such as Wall Art, & Accountants in Dagenham and have listed them below, we hope to add more in the near future.

If you know of any more suppliers of business related services, either matching the list of 2 services we already have or new services, in Dagenham that you can recommend please contact us and we will look at adding them to this page.

A Quarter Of - the old fashioned sweetshop on the Internet!, reward your staff or business clients with the taste and memories of their youth. From individual packs of sweets to mixed gift boxes. (Last Checked : 2020-11-24 12:27)

Dagenham (/ˈdæɡənəm/) is a district and suburban town in East London, England. In the London Borough of Barking and Dagenham, it is 11.5 miles (18.5 km) east of Charing Cross. Historically a parish in the county of Essex, it was an agrarian village and remained mostly undeveloped until 1921, when the London County Council began construction of the large Becontree estate. The population of the area significantly increased in the 20th century, with the parish of Dagenham becoming an urban district in 1926 and a municipal borough in 1938. It has formed part of Greater London since 1965 and is a predominantly residential area, with some areas of declining industrial activity, including the Ford Dagenham plant. The southern part of Dagenham, adjacent to the River Thames and known locally for planning purposes as Dagenham Riverside, forms part of the London Riverside section of the Thames Gateway redevelopment area. The total population of Dagenham, including the Becontree estate, was 106,247 as of 2011.

Dagenham first appeared in a document (as Dæccanhaam) in a charter of Barking Abbey dating from 666 AD (though alternative 7th century dates have been suggested for the charter). The name almost certainly originated with a small farmstead, the "ham" or farm of a man called Daecca, as Dæccan hamm in Old English means home of a man called Dæcca. The charter was made to reflect a transfer of land from Aethelred, kinsman of King Saebbi of Essex, to Barking Abbey.

The above introduction to Dagenham uses material from the Wikipedia article 'Dagenham' and is used under licence.

Weather forecast for the next three days for Dagenham 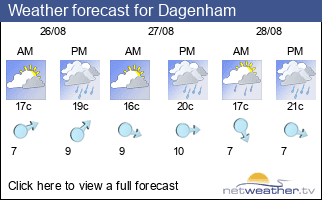