We have searched for business suppliers in Devizes, Wiltshire a town with an approximate population of 18,064 , that at the census in 2011 had a working population (aged between 16 and 74) of 9,046 people in work, and have found 2 suppliers of services such as Wall Art, Business Gifts & Accountants in Devizes and have listed them below, we hope to add more in the near future.

If you know of any more suppliers of business related services, either matching the list of 3 services we already have or new services, in Devizes that you can recommend please contact us and we will look at adding them to this page.

David Owen & Co
David Owen & Co is an established firm of Chartered Accountants and business advisers located in Devizes and Marlborough in Wiltshire. By focusing on the development of people and relationships, and utilising our specialist knowledge and expertise, we can help you to achieve success. ( Last Checked/Updated : 2022-05-19 15:29:18)

A Quarter Of - the old fashioned sweetshop on the Internet!, reward your staff or business clients with the taste and memories of their youth. From individual packs of sweets to mixed gift boxes. (Last Checked : 2022-05-25 01:34)

Not found what you are looking for in Devizes? We have other listings in locations such as Bath & Trowbridge that you may find helpful.

Devizes /dɪˈvaɪzɪz/ is a market town and civil parish in Wiltshire, England. It developed around Devizes Castle, an 11th-century Norman castle, and received a charter in 1141. The castle was besieged during the Anarchy, a 12th-century civil war between Stephen of England and Empress Matilda, and again during the English Civil War when the Cavaliers lifted the siege at the Battle of Roundway Down. Devizes remained under Royalist control until 1645, when Oliver Cromwell attacked and forced the Royalists to surrender. The castle was destroyed in 1648 on the orders of Parliament, and today little remains of it.

From the 16th century Devizes became known for its textiles, and by the early 18th century it held the largest corn market in the West Country, constructing the Corn Exchange in 1857. In the 18th century, brewing, curing of tobacco, and snuff-making were established. The Wadworth Brewery was founded in the town in 1875.

The above introduction to Devizes uses material from the Wikipedia article 'Devizes' and is used under licence.

Weather forecast for the next three days for Devizes 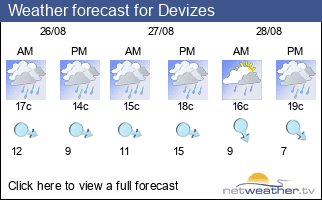