We have searched for business suppliers in Elstree, Hertfordshire a town with an approximate population of 1,986 , that at the census in 2011 had a working population (aged between 16 and 74) of 1,009 people in work, and have found 2 suppliers of services such as Wall Art, Business Gifts & Accountants in Elstree and have listed them below, we hope to add more in the near future.

If you know of any more suppliers of business related services, either matching the list of 3 services we already have or new services, in Elstree that you can recommend please contact us and we will look at adding them to this page.

Daffodil Accounting Ltd
We act for individual cast and crew, sole traders and Limited companies across a variety of trades but have a specialist knowledge of the film & television industry. ( Last Checked/Updated : 2022-03-21 14:45:20)

A Quarter Of - the old fashioned sweetshop on the Internet!, reward your staff or business clients with the taste and memories of their youth. From individual packs of sweets to mixed gift boxes. (Last Checked : 2022-05-23 15:30)

Elstree /ˈɛlztri/ is a large village in the Hertsmere borough of Hertfordshire, England. It is about 15 miles (24 kilometres) northwest of central London on the former A5 road, that follows the course of Watling Street. In 2011, its population was 5,110. It forms part of the civil parish of Elstree and Borehamwood, originally known simply as Elstree.

The village often lends its shorter name to businesses and amenities in the adjacent town of Borehamwood, and the names of Elstree and Borehamwood are used interchangeably. Elstree is perhaps best known for multiple Elstree Film Studio complexes, where many films were made, including BBC Elstree Centre, where the TV soap opera EastEnders is shot. This production centre is actually in Borehamwood.

The above introduction to Elstree uses material from the Wikipedia article 'Elstree' and is used under licence.

Weather forecast for the next three days for Elstree 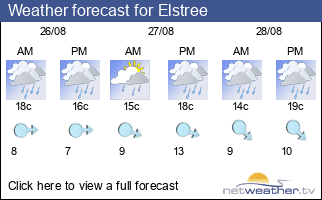