We have searched for business suppliers in Evesham, Worcestershire a town with an approximate population of 23,576 , that at the census in 2011 had a working population (aged between 16 and 74) of 12,344 people in work, and have found 3 suppliers of services such as Wall Art, & Accountants in Evesham and have listed them below split into the type of service that they provide.

If you know of any more suppliers of business related services, either matching the list of 2 services we already have or new services, in Evesham that you can recommend please contact us and we will look at adding them to this page.

PSG Bowdens
We believe that whilst reporting history and ensuring compliance with laws and regulations is essential what really adds value to you is the help we give in reaching your objectives and the proactive advice that improves outcomes for you.

Attwoods
We have a range of clients from small sole trader businesses to large international companies, so whatever the size of business, we can help you achieve your plan for your business by providing accountancy and taxation services tailored to your needs at a stable cost.

John Mitchell - Photo4Me
Wall art suitable for interior design and office receptions, available online and shipped to Evesham. Printed to order on canvas, acrylic and other surfaces with 30 day guarantee.

Not found what you are looking for in Evesham? We have other listings in locations such as Malvern, Eckington, Pershore, Wick & Hanwell that you may find helpful.

Evesham (/ˈiːv(ɪ)ʃəm, ˈiːsəm/) is a market town and parish in the Wychavon district of Worcestershire, in mid England with a population of 24,428, according to the 2011 census. It is located roughly equidistant between Worcester, Cheltenham and Stratford-upon-Avon. It lies within the Vale of Evesham, an area comprising the flood plain of the River Avon, which has been renowned for market gardening. The town centre, situated within a meander of the river, is regularly subject to flooding. The 2007 floods were the most severe in recorded history.

The town was founded around an 8th-century abbey, one of the largest in Europe, which was destroyed during the Dissolution of the Monasteries, with only Abbot Lichfield's Bell Tower remaining. During the 13th century, one of the two main battles of England's Second Barons' War took place near the town, marking the victory of Prince Edward who later became King Edward I. This was the battle of Evesham.

The above introduction to Evesham uses material from the Wikipedia article 'Evesham' and is used under licence.

Weather forecast for the next three days for Evesham 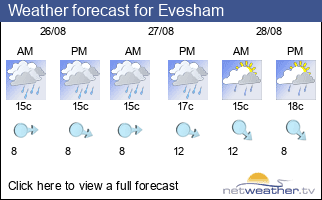