We have searched for business suppliers in Felixstowe, Suffolk a town with an approximate population of 23,564 , that at the census in 2011 had a working population (aged between 16 and 74) of 13,329 people in work, and have found 2 suppliers of services such as Wall Art, & Accountants in Felixstowe and have listed them below, we hope to add more in the near future.

If you know of any more suppliers of business related services, either matching the list of 2 services we already have or new services, in Felixstowe that you can recommend please contact us and we will look at adding them to this page.

Accountants based in Felixstowe

A Quarter Of - the old fashioned sweetshop on the Internet!, reward your staff or business clients with the taste and memories of their youth. From individual packs of sweets to mixed gift boxes. (Last Checked : 2020-11-24 11:38)

Not found what you are looking for in Felixstowe? We have other listings in locations such as Harwich that you may find helpful.

Felixstowe (/ˈfiːlɪkstoʊ/ FEE-lik-stoh) is a seaside town in Suffolk, England. At the 2011 Census, it had a population of 23,689. The Port of Felixstowe is the largest container port in the United Kingdom.

The old Felixstowe hamlet was centred on a pub and church, having stood on the site since long before the Norman conquest of England. The early history of Felixstowe, including its Roman, Anglo-Saxon, Norman and medieval defences, is told under the name of Walton, because the name Felixstowe was given retrospectively, during the 13th century, to a place which had expanded to a form beyond the boundaries of Walton alone. In the Doomsday book, for instance, only Walton is shown, and not Felixstowe, which at the time held little more than a few houses scattered over the cliff tops. Walton was a settlement on the River Orwell and in 1844 had a population of 907 compared to the relatively small Felixstowe Parish holding only 502 people. Walton had always preceded Felixstowe as a settlement as seen by the presence of Walton Castle, built by the Romans in the 3rd century, but today Walton is generally considered part of Felixstowe due to modern expansion.

The above introduction to Felixstowe uses material from the Wikipedia article 'Felixstowe' and is used under licence.

Weather forecast for the next three days for Felixstowe 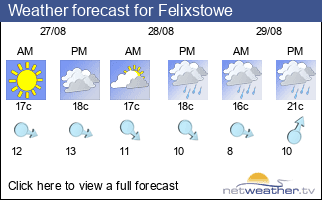