We have searched for business suppliers in Feltham, Middlesex , and have found 4 suppliers of services such as Wall Art, , Accountants, Citizens Advice Bureau & Opticians in Feltham and have listed them below split into the type of service that they provide.

If you know of any more suppliers of business related services, either matching the list of 4 services we already have or new services, in Feltham that you can recommend please contact us and we will look at adding them to this page.

ZAS Consulting Ltd T/A ZAS Accountancy
We deal with all aspects of the accounting and tax side of your business so you can concentrate on what you are great at.

John Mitchell - Photo4Me
Wall art suitable for interior design and office receptions, available online and shipped to Feltham. Printed to order on canvas, acrylic and other surfaces with 30 day guarantee.

Not found what you are looking for in Feltham? We have other listings in locations such as Bradford, Martock, Yeovil & Ashington that you may find helpful.

Feltham (/ˈfɛltəm/) is a large town in West London, England, approximately 13 miles (21 km) from Charing Cross. Historically part of Middlesex, it became part of the London Borough of Hounslow in 1965. The parliametary constituency of Feltham and Heston has been held by Labour Party MPs since 1992. In 2011, the population of the combined census area of Feltham, Bedfont and Hanworth was 63,368, of which around 49% had Indian, Pakistani, Afro-Caribbean or Eastern European family backgrounds.

The economy of the town was largely agrarian until the early twentieth century, when it was transformed by the expansion of the London urban area. Most of the original High Street was demolished in the 1960s and 1970s. Further redevelopment in the early 2000s created the current shopping centre, which opened in 2006.

The above introduction to Feltham uses material from the Wikipedia article 'Feltham' and is used under licence.

Weather forecast for the next three days for Feltham 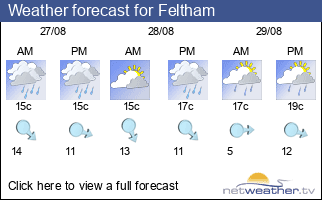