We have searched for business suppliers in Gloucester, Gloucestershire a city with an approximate population of 136,362 , that at the census in 2011 had a working population (aged between 16 and 74) of 76,147 people in work, and have found 7 suppliers of services such as Wall Art, , Accountants, Financial Advice & Local Authority in Gloucester and have listed them below split into the type of service that they provide.

If you know of any more suppliers of business related services, either matching the list of 4 services we already have or new services, in Gloucester that you can recommend please contact us and we will look at adding them to this page.

Griffiths Marshall
We are an independent firm of accountants who cover the whole of Gloucestershire and further afield from our offices in the centre of Gloucester, as well as offices in Lydney and Mitcheldean.

Pitt Godden & Taylor LLP
We focus on small and medium enterprises, whilst still giving the bigger firms' outlooks and services. The practice is based upon an enthusiastic team of young professionals with a wide range of interests and skills.

IT Tax & Accountancy
Based in Bristol Road, Gloucester, we offer a friendly and personal service to local business owners and individuals.

John Mitchell - Photo4Me
Wall art suitable for interior design and office receptions, available online and shipped to Gloucester. Printed to order on canvas, acrylic and other surfaces with 30 day guarantee.

Not found what you are looking for in Gloucester? We have other listings in locations such as Cheltenham that you may find helpful.

Gloucester was founded in AD 97 by the Romans under Emperor Nerva as Colonia Glevum Nervensis, and was granted its first charter in 1155 by Henry II. In 1216 Henry III, aged only ten years, was crowned with a gilded iron ring in the Chapter House of Gloucester Cathedral. Gloucester's significance in the Middle Ages is underlined by the fact that it had a number of monastic establishments, including St Peter's Abbey founded in 679 (later Gloucester Cathedral), the nearby St Oswald's Priory, Gloucester founded in the 880s or 890s, and Llanthony Secunda Priory, founded 1136. The town is also the site of the Siege of Gloucester in 1643, during which the city held out against Royalist forces in the First English Civil War.

A major attraction of the city is Gloucester Cathedral, which is the burial place of King Edward II and Walter de Lacy, and features in scenes from the Harry Potter films. Other features of interest include the museum and school of art and science, the former county jail (on the site of a Saxon and Norman castle), the Shire Hall (now headquarters of the County Council) and the Whitefield memorial church. A park in the south of the city contains a spa, a chalybeate spring having been discovered in 1814.

The above introduction to Gloucester uses material from the Wikipedia article 'Gloucester' and is used under licence.

Weather forecast for the next three days for Gloucester 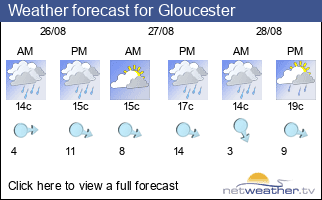