We have searched for business suppliers in Gosport, Hampshire a town with an approximate population of 71,529 , that at the census in 2011 had a working population (aged between 16 and 74) of 34,827 people in work, and have found 2 suppliers of services such as Wall Art, Business Gifts & Local Authority in Gosport and have listed them below, we hope to add more in the near future.

If you know of any more suppliers of business related services, either matching the list of 3 services we already have or new services, in Gosport that you can recommend please contact us and we will look at adding them to this page.

A Quarter Of - the old fashioned sweetshop on the Internet!, reward your staff or business clients with the taste and memories of their youth. From individual packs of sweets to mixed gift boxes. (Last Checked : 2022-05-24 04:15)

Not found what you are looking for in Gosport? We have other listings in locations such as Fawley, Portsmouth, East Wittering, Chichester & Bognor Regis that you may find helpful.

Gosport (/ˈɡɒspɔːrt/ GOS-port) is a town and non-metropolitan borough on the south coast of Hampshire, South East England. At the 2011 Census, its population was 82,662. Gosport is situated on a peninsula on the western side of Portsmouth Harbour, opposite the city of Portsmouth, to which it is linked by the Gosport Ferry. Gosport lies south-east of Fareham, to which it is linked by a Bus Rapid Transit route and the A32. Until the last quarter of the 20th century, Gosport was a major naval town associated with the defence and supply infrastructure of Her Majesty's Naval Base (HMNB) Portsmouth. As such over the years extensive fortifications were created. In 2022, Peter Chegwyn became the Leader of Gosport Borough Council.

Gosport is still home to HMS Sultan and a Naval Armament Supply Facility, as well as a Helicopter Repair base. The Town area of the Borough, including Newtown, consists of the town centre, Stoke Road shopping area, Walpole Park, Royal Clarence Yard and three modern marinas: Royal Clarence, Gosport Marina and Haslar Marina. As part of the Renaissance of Portsmouth Harbour Millennium project, a large sundial, known as the Millennium Timespace, was installed on the harbour front in 2000.

The above introduction to Gosport uses material from the Wikipedia article 'Gosport' and is used under licence.

Weather forecast for the next three days for Gosport 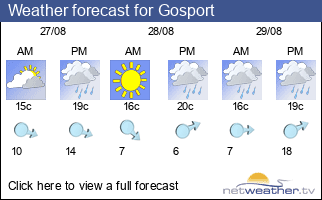