We have searched for business suppliers in Greenwich, London , that at the census in 2011 had a working population (aged between 16 and 74) of 120,232 people in work, and have found 5 suppliers of services such as Wall Art, & Accountants in Greenwich and have listed them below split into the type of service that they provide.

If you know of any more suppliers of business related services, either matching the list of 2 services we already have or new services, in Greenwich that you can recommend please contact us and we will look at adding them to this page.

Simpson Wreford
Simpson Wreford was founded in 1886; and has a successful track record spanning over 125 years. We concentrate on offering a quality, personal service. Based at the Royal Arsenal, Woolwich we are ideally placed to serve the business community of London and the South East.

HP Osalor's Ltd
HP Osalor's Ltd is a firm of Accountants based in Greenwhich London offering accounts, taxation and business advisory and support services to a wide range of businesses and individuals.

Field Sullivan
Field Sullivan is a small Chartered Accountancy practice based in Greenwich. It was established following the merger of the practices of Susan Field and Tim Sullivan on 1 June 2012.

John Mitchell - Photo4Me
Wall art suitable for interior design and office receptions, available online and shipped to Greenwich. Printed to order on canvas, acrylic and other surfaces with 30 day guarantee.

Greenwich (/ˈɡrɛnɪtʃ/ (listen) GREN-itch, /ˈɡrɪnɪdʒ/ GRIN-ij, /ˈɡrɪnɪtʃ/ GRIN-itch, or /ˈɡrɛnɪdʒ/ GREN-ij) is an area of South East London, England, centred 5.5 miles (8.9 km) east-southeast of Charing Cross. It is within the Royal Borough of Greenwich, to which it lends its name. Historically it was in the county of Kent for hundreds of years, then the County of London from 1889 to 1965.

Greenwich is notable for its maritime history and for giving its name to the Greenwich Meridian (0° longitude) and Greenwich Mean Time. The town became the site of a royal palace, the Palace of Placentia from the 15th century, and was the birthplace of many Tudors, including Henry VIII and Elizabeth I. The palace fell into disrepair during the English Civil War and was demolished to be replaced by the Royal Naval Hospital for Sailors, designed by Sir Christopher Wren and his assistant Nicholas Hawksmoor. These buildings became the Royal Naval College in 1873, and they remained a military education establishment until 1998 when they passed into the hands of the Greenwich Foundation. The historic rooms within these buildings remain open to the public; other buildings are used by University of Greenwich and Trinity Laban Conservatoire of Music and Dance.

The above introduction to Greenwich uses material from the Wikipedia article 'Greenwich' and is used under licence.

Weather forecast for the next three days for Greenwich 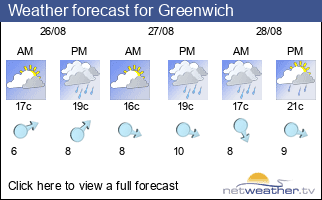