We have searched for business suppliers in Guisborough, Cleveland a town with an approximate population of 16,979 , that at the census in 2011 had a working population (aged between 16 and 74) of 7,492 people in work, and have found 2 suppliers of services such as Wall Art, & Accountants in Guisborough and have listed them below, we hope to add more in the near future.

If you know of any more suppliers of business related services, either matching the list of 2 services we already have or new services, in Guisborough that you can recommend please contact us and we will look at adding them to this page.

Baldwins Accountants
We are one of the UK's fastest growing accountancy firms and now part of the Cogital Group.

John Mitchell - Photo4Me
Wall art suitable for interior design and office receptions, available online and shipped to Guisborough. Printed to order on canvas, acrylic and other surfaces with 30 day guarantee.

Not found what you are looking for in Guisborough? We have other listings in locations such as Darlington, Stockton-on-Tees & Middlesbrough that you may find helpful.

Guisborough (/ˈɡɪzbərə/ (listen) GHIZ-bər-ə) is a market town and civil parish in North Yorkshire, England. It is administered by the unitary authority of Redcar and Cleveland, in which Guisborough ward had a population of 7,662 at the 2011 census. The civil parish of Guisborough, including the outlying villages of Upleatham, Dunsdale and Newton under Roseberry, had a population of 17,777.

Guisborough, once in the North Riding of Yorkshire, was part of the County of Cleveland from 1974 to 1996, and is now in the unitary authority of Redcar and Cleveland.

The above introduction to Guisborough uses material from the Wikipedia article 'Guisborough' and is used under licence.

Weather forecast for the next three days for Guisborough 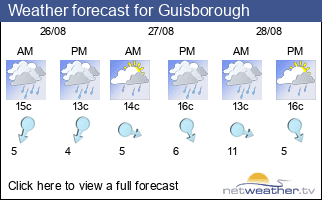