We have searched for business suppliers in Harlow, Essex a town with an approximate population of 82,059 , that at the census in 2011 had a working population (aged between 16 and 74) of 40,463 people in work, and have found 6 suppliers of services such as Wall Art, , Accountants, Local Authority, Opticians & Tool Suppliers in Harlow and have listed them below split into the type of service that they provide.

If you know of any more suppliers of business related services, either matching the list of 5 services we already have or new services, in Harlow that you can recommend please contact us and we will look at adding them to this page.

Phillips & Co
Phillips & Co, accountants in Harlow, provide a personalised service to local business owners and individuals. For help with any of your accountancy and tax needs, please give us a call.

Tool Suppliers based in Harlow

John Mitchell - Photo4Me
Wall art suitable for interior design and office receptions, available online and shipped to Harlow. Printed to order on canvas, acrylic and other surfaces with 30 day guarantee.

Not found what you are looking for in Harlow? We have other listings in locations such as Hemel Hempstead, St Albans, Hatfield, Welwyn Garden City, Hertford, Ware, Broxbourne & Hoddesdon that you may find helpful.

Harlow is a town and local government district in the west of Essex, England. A new town, situated on the border with Hertfordshire and London, Harlow occupies a large area of land on the south bank of the upper Stort Valley, which has been made navigable through other towns and features a canal section near its watermill. Old Harlow is a village-size suburb founded by the early medieval age and most of its high street buildings are early Victorian and residential, mostly protected by one of the Conservation Areas in the district. In Old Harlow is a field named Harlowbury, a de-settled monastic area which has the remains of a chapel, a scheduled ancient monument.

The M11 motorway passes through the east of the district, entirely to the east of the town. Harlow has its own commercial and leisure economy. It is also an outer part of the London commuter belt and employment centre of the M11 corridor which includes Cambridge and London Stansted Airport to the north. At the time of the 2011 Census, Harlow's population was recorded at 81,944 and its district had the third-highest proportion of social housing in England, 26.9%, a legacy of the 1947 commitment to re-house blitzed London families after World War II and provide a percentage of homes for other needy families who cannot afford market rents.

The above introduction to Harlow uses material from the Wikipedia article 'Harlow' and is used under licence.

Weather forecast for the next three days for Harlow 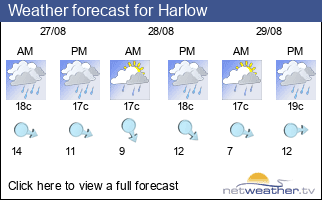