We have searched for business suppliers in Hendon, London , and have found 2 suppliers of services such as Wall Art, & Accountants in Hendon and have listed them below, we hope to add more in the near future.

If you know of any more suppliers of business related services, either matching the list of 2 services we already have or new services, in Hendon that you can recommend please contact us and we will look at adding them to this page.

Accountants based in Hendon

Landau Baker Ltd
Landau Baker Ltd is a company of Chartered Accountants and Registered Auditors based in Hendon, North-West London offering accounts, taxation and business advisory and support services to a wide range of businesses and individuals.

John Mitchell - Photo4Me
Wall art suitable for interior design and office receptions, available online and shipped to Hendon. Printed to order on canvas, acrylic and other surfaces with 30 day guarantee.

Not found what you are looking for in Hendon? We have other listings in locations such as Sunderland that you may find helpful.

Hendon is a London urban area in the Borough of Barnet, 7 miles (11 km) northwest of Charing Cross, between the A41, A406 and the M1 motorway. Hendon was an ancient parish in the county of Middlesex and has been part of Greater London since 1965. It used to be the home for the London Aerodrome which later became RAF Hendon. From 1972 the site of the RAF station was gradually handed over to the RAF Museum London. Hendon had a population of 52,972 in 2011 which includes the West Hendon and Colindale wards.

Hendon was historically a civil parish in the county of Middlesex. The manor is described in Domesday (1087), but the name 'Hendun' – meaning 'at the highest hill' – is of earlier origin. Evidence of Roman settlement was discovered by members of the Hendon and District Archaeological Society and others; an urn burial of a headless child was found in Sunny Hill Park.

The above introduction to Hendon uses material from the Wikipedia article 'Hendon' and is used under licence.

Weather forecast for the next three days for Hendon 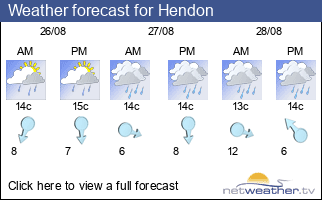