We have searched for business suppliers in Hitchin, Hertfordshire a town with an approximate population of 34,266 , that at the census in 2011 had a working population (aged between 16 and 74) of 18,746 people in work, and have found 6 suppliers of services such as Wall Art, , Accountants & Local Authority in Hitchin and have listed them below split into the type of service that they provide.

If you know of any more suppliers of business related services, either matching the list of 3 services we already have or new services, in Hitchin that you can recommend please contact us and we will look at adding them to this page.

Godfrey Laws
Godfrey Laws is a firm of Chartered Accountants with offices in Hertfordshire and Bedfordshire offering accounts, taxation and business advisory and support services to a wide range of businesses and individuals.

Leadermans
Leadermans is a general accountancy practice with a broad client base consisting of businesses of varying size, ranging from sole traders and partnerships to privately owned limited companies with turnovers of several million pounds.

Base 52
Accountants in Hitchin - Base52 are a firm of Accountants based in Hitchin, Hertfordshire (Herts). Our aim is to provide the highest standards of professional service and advice to all.

Chancellers LLP
Chancellers is an established firm of Chartered Accountants with offices in Hitchin and Kensington, London. We have over forty years' experience in providing trusted services and proactive business advice to our clients.

Local Authority based in Hitchin

John Mitchell - Photo4Me
Wall art suitable for interior design and office receptions, available online and shipped to Hitchin. Printed to order on canvas, acrylic and other surfaces with 30 day guarantee.

Not found what you are looking for in Hitchin? We have other listings in locations such as Leighton Buzzard, Toddington, Preston, Letchworth, Rushden & Farnham that you may find helpful.

Hitchin is first noted as the central place of the Hicce people, a tribe holding 300 hides of land as mentioned in a 7th-century document, the Tribal Hidage. Hicce, or Hicca may mean the people of the horse. The tribal name is Old English and derives from the Middle Anglian people. It has been suggested that Hitchin was the location of 'Clofeshoh', the place chosen in 673 by Theodore of Tarsus the Archbishop of Canterbury during the Synod of Hertford, the first meeting of representatives of the fledgling Christian churches of Anglo-Saxon England, to hold annual synods of the churches as Theodore attempted to consolidate and centralise Christianity in England.

By 1086 Hitchin is described as a Royal Manor in Domesday Book: the feudal services of Avera and Inward, usually found in the eastern counties, especially Cambridgeshire and Hertfordshire, were due from the sokemen, but the manor of Hitchin was unique in levying Inward. Evidence has been found to suggest that the town was once provided with an earthen bank and ditch fortification, probably in the early tenth century but this did not last. The modern spelling of the town first appears in 1618 in the "Hertfordshire Feet of Fines".

The above introduction to Hitchin uses material from the Wikipedia article 'Hitchin' and is used under licence.

Weather forecast for the next three days for Hitchin 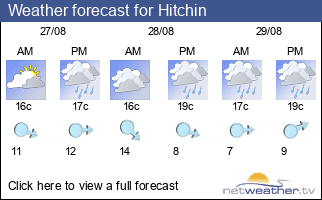