We have searched for business suppliers in Hove, East Sussex , that at the census in 2011 had a working population (aged between 16 and 74) of 1,116 people in work, and have found 3 suppliers of services such as Wall Art, Business Gifts , Accountants & Local Authority in Hove and have listed them below split into the type of service that they provide.

If you know of any more suppliers of business related services, either matching the list of 4 services we already have or new services, in Hove that you can recommend please contact us and we will look at adding them to this page.

Accountants based in Hove

Wilson Sandford
Accountants in Hove - Wilson Sandford is a firm of chartered accountants based in Brighton and Hove, East Sussex. Our aim is to provide the highest standards of professional service and advice to all. ( Last Checked/Updated : 2022-02-11 02:25:01)

A Quarter Of - the old fashioned sweetshop on the Internet!, reward your staff or business clients with the taste and memories of their youth. From individual packs of sweets to mixed gift boxes. (Last Checked : 2022-05-24 04:41)

Not found what you are looking for in Hove? We have other listings in locations such as Wick, Littlehampton, Clapham, Worthing, Shoreham-by-Sea, Brighton, Preston, Newhaven, Polegate & Hailsham that you may find helpful.

Hove /hoʊv/ is a seaside resort and one of the two main parts of the city of Brighton and Hove, along with Brighton in East Sussex, England. Originally a "small but ancient fishing village" surrounded by open farmland, it grew rapidly in the 19th century in response to the development of its eastern neighbour Brighton, and by the Victorian era it was a fully developed town with borough status. Neighbouring parishes such as Aldrington and Hangleton were annexed in the late 19th and early 20th centuries. The neighbouring urban district of Portslade was merged with Hove in 1974. In 1997, as part of local government reform, the borough merged with Brighton to form the Borough of Brighton and Hove, and this unitary authority was granted city status in 2000.

Old spellings of Hove include Hou (Domesday Book, 1086), la Houue (1288), Huua (13th century), Houve (13th and 14th centuries), Huve (14th and 15th centuries), Hova (16th century) and Hoova (1675). The etymology was disputed at length during the 20th century as academics offered several competing theories. Suggestions included an Old Norse word meaning "hall", "sanctuary" or "barrow", in reference to the Bronze Age barrow near the present Palmeira Square; an Old English phrase æt þæm hofe meaning "at the hall";[note 1] the Old English hufe meaning "shelter" or "covering"; and the Middle English hofe meaning "anchorage". No other places in Britain are called Hove, and single-syllable names as a whole are rare in Sussex. The modern name was originally pronounced "Hoove" (/ˈhuːv/). The present pronunciation (/ˈhoʊv/) "is comparatively recent".

The above introduction to Hove uses material from the Wikipedia article 'Hove' and is used under licence.

Weather forecast for the next three days for Hove 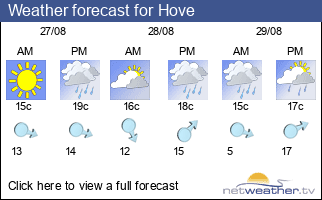