We have searched for business suppliers in Jarrow, Tyne And Wear a town with an approximate population of 43,431 , that at the census in 2011 had a working population (aged between 16 and 74) of 19,133 people in work, and have found 2 suppliers of services such as Wall Art, Business Gifts & Accountants in Jarrow and have listed them below, we hope to add more in the near future.

If you know of any more suppliers of business related services, either matching the list of 3 services we already have or new services, in Jarrow that you can recommend please contact us and we will look at adding them to this page.

Newton and Co
Newton & Co is a dynamic firm of accountants and business advisors, headed up by our Senior Partner Mark Newton; and has highly experienced staff. Having established in 1990, our office is situated in Jarrow, Tyne and Wear. ( Last Checked/Updated : 2021-11-09 01:17:01)

A Quarter Of - the old fashioned sweetshop on the Internet!, reward your staff or business clients with the taste and memories of their youth. From individual packs of sweets to mixed gift boxes. (Last Checked : 2022-05-23 15:44)

Not found what you are looking for in Jarrow? We have other listings in locations such as Horsley, Prudhoe, Gosforth, Newcastle upon Tyne, Gateshead, Hebburn & South Shields that you may find helpful.

Jarrow (/ˈdʒæroʊ/ or /ˈdʒærə/) is a town in South Tyneside, England. Historically in County Durham, it is now part of Tyne and Wear. It is situated on the south bank of the River Tyne and is home to the southern portal of the Tyne Tunnel. In the eighth century, the monastery of Saint Paul in Jarrow (now Monkwearmouth–Jarrow Abbey) was the home of The Venerable Bede, who is regarded as the greatest Anglo-Saxon scholar and the father of English history. From the middle of the 19th century until 1935, Jarrow was a centre for shipbuilding, and was the starting point of the Jarrow March against unemployment in 1936. Jarrow had a population of 43,431 in 2011.

The town's name is recorded around AD 750 as Gyruum, representing Old English [æt] Gyrwum = "[at] the marsh dwellers", from Anglo-Saxon gyr = "mud", "marsh". Later spellings are Jaruum in 1158, and Jarwe in 1228. In the Northumbrian dialect it is known as Jarra.

The above introduction to Jarrow uses material from the Wikipedia article 'Jarrow' and is used under licence.

Weather forecast for the next three days for Jarrow 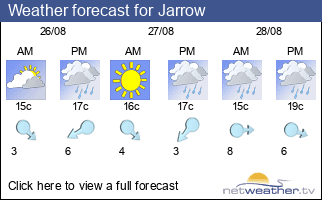