We have searched for business suppliers in Keynsham, Bristol a town with an approximate population of 15,641 , that at the census in 2011 had a working population (aged between 16 and 74) of 7,334 people in work, and have found 2 suppliers of services such as Wall Art, & Accountants in Keynsham and have listed them below, we hope to add more in the near future.

If you know of any more suppliers of business related services, either matching the list of 2 services we already have or new services, in Keynsham that you can recommend please contact us and we will look at adding them to this page.

Amanda Lodge & Co
Whether you are an established business, just starting out or need help with a personal tax return Amanda Lodge & Co provides a first class, cost effective and tailored service to businesses and personal clients.

John Mitchell - Photo4Me
Wall art suitable for interior design and office receptions, available online and shipped to Keynsham. Printed to order on canvas, acrylic and other surfaces with 30 day guarantee.

Not found what you are looking for in Keynsham? We have other listings in locations such as Clevedon, Bath & Neston that you may find helpful.

Keynsham (/ˈkeɪnʃəm/ KAYN-shəm) is a town and civil parish located between Bristol and Bath in Somerset, England. It has a population of 16,000. It was listed in the Domesday Book as Cainesham, which is believed to mean the home of Saint Keyne.

The site of the town has been occupied since prehistoric times, and may have been the site of the Roman settlement of Trajectus. The remains of at least two Roman villas have been excavated, and an additional 15 Roman buildings have been detected beneath the Keynsham Hams. Keynsham developed into a medieval market town after Keynsham Abbey was founded around 1170. It is situated at the confluence of the River Chew and River Avon and was subject to serious flooding before the creation of Chew Valley Lake and river level controls at Keynsham Lock in 1727. The Chew Stoke flood of 1968 inundated large parts of the town. It was home to the Cadbury's chocolate factory, Somerdale, which opened in 1935 as a major employer in the town.

The above introduction to Keynsham uses material from the Wikipedia article 'Keynsham' and is used under licence.

Weather forecast for the next three days for Keynsham 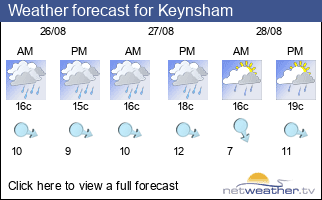