We have searched for business suppliers in Littlehampton, West Sussex a town with an approximate population of 55,706 , that at the census in 2011 had a working population (aged between 16 and 74) of 24,595 people in work, and have found 4 suppliers of services such as Wall Art, , Accountants & Local Authority in Littlehampton and have listed them below split into the type of service that they provide.

If you know of any more suppliers of business related services, either matching the list of 3 services we already have or new services, in Littlehampton that you can recommend please contact us and we will look at adding them to this page.

Botting & Co
We are a friendly firm of Chartered Certified Accountants and Tax Advisors that work with small and medium sized businesses in & across West Sussex, including: Littlehampton, Bognor Regis, Arundel, Chichester, Rustington, East Preston, Goring by Sea, Worthing and Horsham.

Vincent Accountancy & Taxation Services
Based in Littlehampton, our expert team are available to help your business grow by offering guidance and advice across a wide range of financial issues.

John Mitchell - Photo4Me
Wall art suitable for interior design and office receptions, available online and shipped to Littlehampton. Printed to order on canvas, acrylic and other surfaces with 30 day guarantee.

Not found what you are looking for in Littlehampton? We have other listings in locations such as Portsmouth, Havant, Chichester, Bognor Regis, Wick, Clapham, Worthing, Shoreham-by-Sea, Hove, Brighton & Preston that you may find helpful.

The parish covers an area of 11.35 km2 (4 sq mi). The suburban area of the town has a population of approximately 55,000. The conurbation includes other settlements: Wick in the north west; Lyminster to the north; and Rustington to the east. Wick and Toddington, which has a large business park, became part of the town in 1901. Nearby towns include Bognor Regis (WSW) and Worthing to the east. The town is also the westernmost settlement of the 15th largest urban area in England and Wales, the Brighton/Worthing/Littlehampton conurbation, a region encompassing 474,485 people (2011 census). The South Downs National Park commences 3 miles (4.8 km) north of the town: Littlehampton links to Amberley and Arundel by footpaths and railway as well as by roads.

A human settlement at Littlehampton can be traced back to prehistoric and Roman times, while it appears in the Domesday Book of 1086 as the small hamlet of 'Hantone'. The settlement is believed to have been a fishing community around this time, appearing on a French map in around 1100 as 'Hanton'. The settlement is then believed to have been given to the Abbey of St Martin de Seez in Normandy, who owned Littlehampton until around 1400. The area then passed back to the ownership of successive Earls of Arundel and Dukes of Norfolk, whose successors still reside in Arundel today.

The above introduction to Littlehampton uses material from the Wikipedia article 'Littlehampton' and is used under licence.

Weather forecast for the next three days for Littlehampton 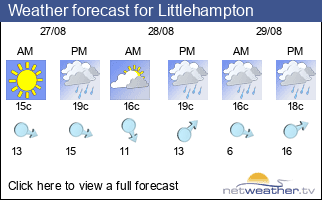