If you know of any more suppliers of business related services, either matching the list of 2 services we already have or new services, in Merseyside that you can recommend please contact us and we will look at adding them to this page.

Accountants based in Merseyside

Tom Carroll
Tom Carroll Associates Limited was formed by Tom Carroll in 1991 after having worked in a variety of accountancy firms, from a 'Big Six' firm to more locally based practices. All along the goal was to create a practice that was renowned for the quality of its advice and which set the standards others strive for.

The Priory Partnership
We work much more closely with our clients than traditional accountants. We are selective in the clients that we act for, as we want to get to know their businesses inside out, enabling us to easily identify problems and spot opportunities. We want to help improve profits and encourage growth.

Topping & Company
Topping & Co are a firm of Chartered Accountants & Business Advisers based in Southport, Merseyside

John Mitchell - Photo4Me
Wall art suitable for interior design and office receptions, available online and shipped to Merseyside. Printed to order on canvas, acrylic and other surfaces with 30 day guarantee.

Merseyside (/ˈmɜːrzisaɪd/ MUR-zee-syde) is a metropolitan county in North West England, with a population of 1.38 million. It encompasses the metropolitan area centred on both banks of the lower reaches of the Mersey Estuary and comprises five metropolitan boroughs: Knowsley, St Helens, Sefton, Wirral and the city of Liverpool. Merseyside, which was created on 1 April 1974 as a result of the Local Government Act 1972, takes its name from the River Mersey.

Merseyside spans 249 square miles (645 km2) of land which border Lancashire (to the north-east), Greater Manchester (to the east), Cheshire (to the south and south-east) and the Irish Sea to the west. North Wales is across the Dee Estuary. There is a mix of high density urban areas, suburbs, semi-rural and rural locations in Merseyside, but overwhelmingly the land use is urban. It has a focused central business district, formed by Liverpool City Centre, but Merseyside is also a polycentric county with five metropolitan districts, each of which has at least one major town centre and outlying suburbs. The Liverpool Urban Area is the fifth most populous conurbation in England and dominates the geographic centre of the county, while the smaller Birkenhead Urban Area dominates the Wirral Peninsula in the south.

The above introduction to Merseyside uses material from the Wikipedia article 'Merseyside' and is used under licence.

Weather forecast for the next three days for Merseyside 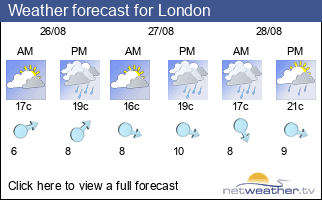