We have searched for business suppliers in Middlesbrough, Cleveland a town with an approximate population of 174,700 , that at the census in 2011 had a working population (aged between 16 and 74) of 68,952 people in work, and have found 7 suppliers of services such as Wall Art, , Accountants & Local Authority in Middlesbrough and have listed them below split into the type of service that they provide.

If you know of any more suppliers of business related services, either matching the list of 3 services we already have or new services, in Middlesbrough that you can recommend please contact us and we will look at adding them to this page.

Accountants based in Middlesbrough

Byes
Leonard Bye are a firm of Chartered Accountants in Middlesbrough, Teesside with clients across the region.

Baldwins Accountants
We are one of the UK's fastest growing accountancy firms and now part of the Cogital Group.

John Mitchell - Photo4Me
Wall art suitable for interior design and office receptions, available online and shipped to Middlesbrough. Printed to order on canvas, acrylic and other surfaces with 30 day guarantee.

Not found what you are looking for in Middlesbrough? We have other listings in locations such as Whitton, Stockton-on-Tees, Billingham & Guisborough that you may find helpful.

Middlesbrough (/ˈmɪdəlzbrə/ (listen) MID-əlz-brə) is a large post-industrial town in North Yorkshire, England. The local council, a unitary authority, is Middlesbrough Borough Council. The 2011 Census recorded the borough's total resident population as 138,400 and the wider urban settlement's as 174,700, making it the largest settlement within the ceremonial county of North Yorkshire. Middlesbrough is part of the larger built-up area of Teesside, which had an overall population of 376,333 at the 2011 Census.

Middlesbrough became a county borough within the North Riding of Yorkshire in 1889. In 1968 the borough was merged with a number of others to form the County Borough of Teesside, which was absorbed in 1974 by the county of Cleveland. In 1996 Cleveland was abolished, and Middlesbrough Borough Council became a unitary authority within the county of North Yorkshire. Erimus ("We shall be" in Latin) was chosen as Middlesbrough's motto in 1830. It recalls Fuimus ("We have been") the motto of the Norman/Scottish Bruce family, who were lords of Cleveland in the Middle Ages. The town's coat of arms is an azure lion, from the arms of the Bruce family, a star, from the arms of Captain James Cook, and two ships, representing shipbuilding and maritime trade.

The above introduction to Middlesbrough uses material from the Wikipedia article 'Middlesbrough' and is used under licence.

Weather forecast for the next three days for Middlesbrough 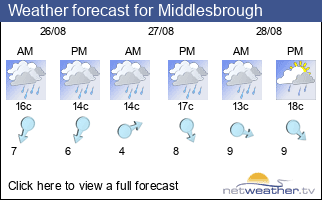