We have searched for business suppliers in Minehead, Somerset a town with an approximate population of 11,981 , that at the census in 2011 had a working population (aged between 16 and 74) of 5,254 people in work, and have found 3 suppliers of services such as Wall Art, , Accountants & Printers in Minehead and have listed them below split into the type of service that they provide.

If you know of any more suppliers of business related services, either matching the list of 3 services we already have or new services, in Minehead that you can recommend please contact us and we will look at adding them to this page.

Exmoor Printers
Exmoor Printers was started in 2005 and since then we have been building a reputation for a quick, reliable and high quality printing service at affordable prices.

John Mitchell - Photo4Me
Wall art suitable for interior design and office receptions, available online and shipped to Minehead. Printed to order on canvas, acrylic and other surfaces with 30 day guarantee.

Not found what you are looking for in Minehead? We have other listings in locations such as Burnham-on-Sea that you may find helpful.

Minehead is a coastal town and civil parish in Somerset, England. It lies on the south bank of the Bristol Channel, 21 miles (34 km) north-west of the county town of Taunton, 12 miles (19 km) from the border with the county of Devon and in proximity of the Exmoor National Park. The parish of Minehead has a population of approximately 11,981 making it the most populous town in the western part of the Somerset West and Taunton local government district, which in turn, is the worst area in the country for social mobility. This figure includes Alcombe and Woodcombe, suburban villages which have been subsumed into Minehead.

There is evidence of human occupation in the area since the Bronze and Iron Ages. Before the Norman conquest it was held by Ælfgar, Earl of Mercia and after it by William de Moyon and his descendants, who administered the area from Dunster Castle, which was later sold to Sir George Luttrell and his family. There was a small port at Minehead by 1380, which grew into a major trading centre during the medieval period. Most trade transferred to larger ports during the 20th century, but pleasure steamers did call at the port. Major rebuilding took place in the Lower or Middle town area following a fire in 1791 and the fortunes of the town revived with the growth in sea bathing, and by 1851 was becoming a retirement centre. There was a marked increase in building during the early years of the 20th century, which resulted in the wide main shopping avenue and adjacent roads with Edwardian style architecture. The town's flood defences were improved after a storm in 1990 caused flooding.

The above introduction to Minehead uses material from the Wikipedia article 'Minehead' and is used under licence.

Weather forecast for the next three days for Minehead 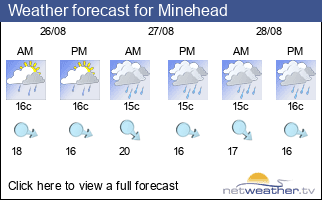