We have searched for business suppliers in Neston, Wirral a town with an approximate population of 15,064 , that at the census in 2011 had a working population (aged between 16 and 74) of 6,836 people in work, and have found 2 suppliers of services such as Wall Art, Business Gifts & Accountants in Neston and have listed them below, we hope to add more in the near future.

If you know of any more suppliers of business related services, either matching the list of 3 services we already have or new services, in Neston that you can recommend please contact us and we will look at adding them to this page.

A Quarter Of - the old fashioned sweetshop on the Internet!, reward your staff or business clients with the taste and memories of their youth. From individual packs of sweets to mixed gift boxes. (Last Checked : 2022-05-23 16:51)

Not found what you are looking for in Neston? We have other listings in locations such as Abergele, Rhyl, St Asaph, Newmarket, Holywell, Heswall, Whitby, Ellesmere Port, Netherton, Clifton, Acton & Northwich that you may find helpful.

Neston is a town and civil parish in the unitary authority of Cheshire West and Chester, England. It is located on the Wirral Peninsula, in Cheshire. Parkgate is located to the north west and the villages of Little Neston and Ness to the south of the town. At the 2001 census the population of Neston ward was recorded as 3,521, increasing to 4,329 at the 2011 census. The town and civil parish also includes Little Neston; Parkgate; and Riverside wards; along with part of Burton and Ness ward, and had a population of 15,162 in 2001, increasing to 15,221 in 2011.

The name is of Viking origin, deriving from the Old Norse Nes-tún, meaning 'farmstead or settlement at/near a promontory or headland'. Another Nesttun town can be found near Bergen, Norway. It is also mentioned in the Domesday Book as Nestone under the ownership of a William Fitznigel, with a population of eight households.

The above introduction to Neston uses material from the Wikipedia article 'Neston' and is used under licence.

Weather forecast for the next three days for Neston 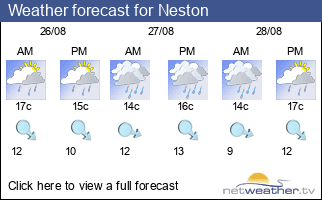