We have searched for business suppliers in Newham, London , that at the census in 2011 had a working population (aged between 16 and 74) of 132,454 people in work, and have found 2 suppliers of services such as Wall Art, Business Gifts & Local Authority in Newham and have listed them below, we hope to add more in the near future.

If you know of any more suppliers of business related services, either matching the list of 3 services we already have or new services, in Newham that you can recommend please contact us and we will look at adding them to this page.

A Quarter Of - the old fashioned sweetshop on the Internet!, reward your staff or business clients with the taste and memories of their youth. From individual packs of sweets to mixed gift boxes. (Last Checked : 2021-10-28 15:51)

Not found what you are looking for in Newham? We have other listings in locations such as Preston & Newtown that you may find helpful.

The London Borough of Newham /ˈnjuːəm/ (listen) is a London borough created in 1965 by the London Government Act 1963. It covers an area previously administered by the Essex county boroughs of West Ham and East Ham, authorities that were both abolished by the same act. The name Newham reflects its creation and combines the compass points of the old borough names. Situated on the borders of inner and outer East London, Newham has a population of 353,134, which is the third highest of the London boroughs and also makes it the 20th most populous district in England. The local authority is Newham London Borough Council.

It is 5 miles (8 km) east of the City of London, north of the River Thames (the Woolwich Ferry and Woolwich foot tunnel providing the only crossings to the south), bounded by the River Lea to its west and the North Circular Road to its east. Newham was one of the six host boroughs for the 2012 Summer Olympics and contains most of the Olympic Park including the London Stadium, and also contains the London City Airport. Major districts include East Ham, Stratford, Plaistow, Forest Gate and Canning Town.

The above introduction to Newham uses material from the Wikipedia article 'Newham' and is used under licence.

Weather forecast for the next three days for Newham 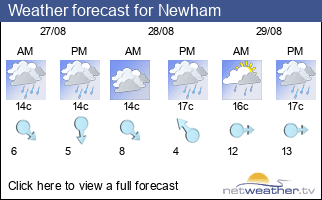