If you know of any more suppliers of business related services, either matching the list of 3 services we already have or new services, in Orpington that you can recommend please contact us and we will look at adding them to this page.

Glen Vaughan
Glen Vaughan & Associates are a firm of Accountants based in Orpington, Kent. We also cover Beckenham, Bromley, Croydon, Kent and London. Our aim is to provide the highest standards of professional service and advice to all.

John Mitchell - Photo4Me
Wall art suitable for interior design and office receptions, available online and shipped to Orpington. Printed to order on canvas, acrylic and other surfaces with 30 day guarantee.

Orpington is a town and electoral ward in Greater London, England, at the south-eastern edge of London's urban sprawl. Part of the borough of Bromley, it is identified in the London Plan as one of 35 major centres in Greater London. It was an ancient parish in the county of Kent. It is located is 13.3 miles from Charing Cross. The town of Orpington, including its localities such as Petts Wood, Farnborough and Chelsfield, had a population of 90,315 as of 2011.

Stone Age tools have been found in several areas of Orpington, including Goddington Park, Priory Gardens, the Ramsden estate, and Poverest. Early Bronze Age pottery fragments have been found in the Park Avenue area. During the building of Ramsden Boys School in 1956, the remains of an Iron Age farmstead were excavated. The area was occupied in Roman times, as shown by Crofton Roman Villa and the Roman bath-house at Fordcroft. During the Anglo-Saxon period, Fordcroft Anglo-Saxon cemetery was used in the area. The first record of the name Orpington occurs in 1038, when King Cnut's treasurer Eadsy gave land at "Orpedingetune" to the Monastery of Christ Church at Canterbury. The parish church also pre-dates the Domesday Book. On 22 July 1573, Queen Elizabeth I was entertained at Bark Hart (Orpington Priory) and her horses stabled at the Anchor and Hope Inn (Orpington High Street). On the southern edge of Orpington, Green St Green is recorded as 'Grenstretre', which means a road covered with grass. It is known in the 1800s as Greenstead Green.

The above introduction to Orpington uses material from the Wikipedia article 'Orpington' and is used under licence.

Weather forecast for the next three days for Orpington 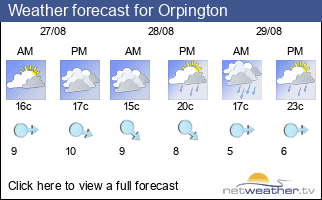