We have searched for business suppliers in Paignton, Devon a town with an approximate population of 64,410 , that at the census in 2011 had a working population (aged between 16 and 74) of 27,972 people in work, and have found 3 suppliers of services such as Wall Art, & Accountants in Paignton and have listed them below split into the type of service that they provide.

If you know of any more suppliers of business related services, either matching the list of 2 services we already have or new services, in Paignton that you can recommend please contact us and we will look at adding them to this page.

Jigsaw Accounting
We have been serving clients in the Devon area since 2006, mainly providing services to the small business sector. We aim to provide a first class service, in a friendly manner and explain things in a clear understandable language. ( Last Checked/Updated : 2020-07-30 16:01:59)

A Quarter Of - the old fashioned sweetshop on the Internet!, reward your staff or business clients with the taste and memories of their youth. From individual packs of sweets to mixed gift boxes. (Last Checked : 2020-08-05 03:29)

Not found what you are looking for in Paignton? We have other listings in locations such as Totnes & Torquay that you may find helpful.

Paignton (/ˈpeɪntən/ PAYN-tən) is a seaside town on the coast of Tor Bay in Devon, England. Together with Torquay and Brixham it forms the borough of Torbay which was created in 1998. The Torbay area is a holiday destination known as the English Riviera. Paignton's population in the United Kingdom Census of 2011 was 49,021. It has origins as a Celtic settlement and was first mentioned in 1086. It grew as a small fishing village and a new harbour was built in 1847. A railway line was opened to passengers in 1859 creating links to Torquay and London. As its population increased, it merged with the villages of Goodrington and Preston. Paignton is around 25 miles (40 km) north east of Plymouth and 20 miles (32 km) south of Exeter, and has the fourth largest population in Devon.

Paignton is mentioned in the Domesday Book of AD 1086 as Peintone in the ancient hundred of Kerswell. Formerly written Peynton, Payngton and Paington, the name is derived from "Paega" an Anglo-Saxon personal name, "ing" meaning "the people of" and "ton" an enclosure, estate or homestead, the original Anglo-Saxon settlement. Originally, the beach was backed by low sand dunes with marshes behind on the flat land between the sea and the hills behind. The settlement grew up on the dry ground at the foot of the hills, and also as a separate hamlet in the shelter of Roundham Head, which was a fishing settlement. The first church was probably built using wood in the eighth century In late Saxon times, the manor was owned by Leofric, the Bishop of Exeter, and later bishops built a palace, some remains of which, including the "Coverdale" Tower can be seen to the south of the parish church. Winner Street owes its name to a corruption of the word "Wynerde", referring to vineyards or, at least to traders in wine in the medieval period. Paignton was given the status of a borough having a market and fair in 1294.

The above introduction to Paignton uses material from the Wikipedia article 'Paignton' and is used under licence.

Weather forecast for the next three days for Paignton 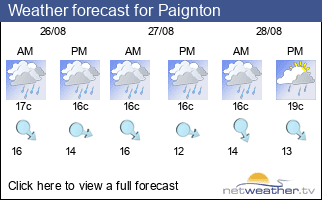