We have searched for business suppliers in Peebles, Borders a town with an approximate population of 8,376 , and have found 2 suppliers of services such as Wall Art, & Accountants in Peebles and have listed them below, we hope to add more in the near future.

If you know of any more suppliers of business related services, either matching the list of 2 services we already have or new services, in Peebles that you can recommend please contact us and we will look at adding them to this page.

John Mitchell - Photo4Me
Wall art suitable for interior design and office receptions, available online and shipped to Peebles. Printed to order on canvas, acrylic and other surfaces with 30 day guarantee.

Peebles (Scottish Gaelic: Na Pùballan) is a royal burgh in Peeblesshire, of which it is the county town, within the Scottish Borders region. According to the 2011 census, the population was 8,376.

Initially a market town, Peebles played a role in the woollen industry of the Borders during the 19th and early-20th centuries. Most mills closed by the 1960s, although the last one remained open until 2015. The character of Peebles has changed; the town serves as home to many people who commute to work in Edinburgh, as well as being a popular tourist destination, especially in the summer. In the mid-to-late 19th century health tourism flourished, centring on hydropathic establishments, which over time morphed into a hotel format, with Peebles Hydro Hotel being one of the few survivors of that era. Notable buildings in the town include the Old Parish Church of Peebles and Neidpath Castle. Other local attractions include a museum and the Kailzie Gardens. Peebles has won multiple awards for the range of shops on its High Street.

The above introduction to Peebles uses material from the Wikipedia article 'Peebles' and is used under licence.

Weather forecast for the next three days for Peebles 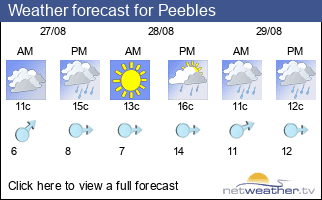