We have searched for business suppliers in Penzance, Cornwall a town with an approximate population of 16,336 , that at the census in 2011 had a working population (aged between 16 and 74) of 8,228 people in work, and have found 3 suppliers of services such as Wall Art, , Accountants & Tool Suppliers in Penzance and have listed them below split into the type of service that they provide.

If you know of any more suppliers of business related services, either matching the list of 3 services we already have or new services, in Penzance that you can recommend please contact us and we will look at adding them to this page.

Walker Moyle
Walker Moyle's roots date back to 1925, making us one of the most long-established accountancy practices in West Cornwall. We have offices in Penzance, Redruth and St. Ives, with the majority of our clients based in Cornwall.

John Mitchell - Photo4Me
Wall art suitable for interior design and office receptions, available online and shipped to Penzance. Printed to order on canvas, acrylic and other surfaces with 30 day guarantee.

Not found what you are looking for in Penzance? We have other listings in locations such as Helston & Falmouth that you may find helpful.

Penzance (/pɛnˈzæns/ pen-ZANSS; Cornish: Pennsans) is a town, civil parish and port in Cornwall, in England, United Kingdom. It is the most westerly major town in Cornwall and is about 64 miles (103 km) west-southwest of Plymouth and 255 miles (410 km) west-southwest of London. Situated in the shelter of Mount's Bay, the town faces south-east onto the English Channel, is bordered to the west by the fishing port of Newlyn, to the north by the civil parish of Madron and to the east by the civil parish of Ludgvan. The civil parish includes the town of Newlyn and the villages of Mousehole, Paul, Gulval, and Heamoor. Granted various royal charters from 1512 onwards and incorporated on 9 May 1614, it has a population of 21,200 (2011 census).

Penzance's former main street Chapel Street has a number of interesting features, including the Egyptian House, the Union Hotel (including a Georgian theatre which is no longer in use) and Branwell House, where the mother and aunt of the famous Brontë sisters once lived. Regency, and Georgian terraces and houses are common in some parts of the town. The nearby sub-tropical Morrab Gardens has a large collection of tender trees and shrubs, many of which cannot be grown outdoors anywhere else in the UK. Also of interest is the seafront with its promenade and the open-air seawater Jubilee Bathing Pool (one of the oldest surviving Art Deco swimming baths in the country).

The above introduction to Penzance uses material from the Wikipedia article 'Penzance' and is used under licence.

Weather forecast for the next three days for Penzance 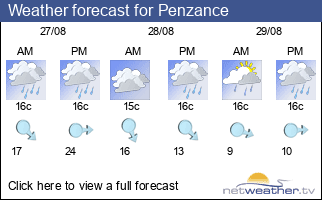