We have searched for business suppliers in Pontefract, West Yorkshire a town with an approximate population of 29,305 , that at the census in 2011 had a working population (aged between 16 and 74) of 20,432 people in work, and have found 4 suppliers of services such as Wall Art, Business Gifts & Accountants in Pontefract and have listed them below split into the type of service that they provide.

If you know of any more suppliers of business related services, either matching the list of 3 services we already have or new services, in Pontefract that you can recommend please contact us and we will look at adding them to this page.

HBH
Website of Pontefract based HBH Chartered Accountants, accountancy, tax and audit experts, committed to helping you grow your business with a guarantee of professionalism and excellent service. ( Last Checked/Updated : 2022-03-20 19:13:01)

A Quarter Of - the old fashioned sweetshop on the Internet!, reward your staff or business clients with the taste and memories of their youth. From individual packs of sweets to mixed gift boxes. (Last Checked : 2022-05-24 12:49)

Not found what you are looking for in Pontefract? We have other listings in locations such as Halifax, Brighouse, Clifton, Cleckheaton, Batley, Dewsbury, Wakefield, Castleford & Goole that you may find helpful.

Pontefract is a historic market town in the Metropolitan Borough of Wakefield in West Yorkshire, England, east of Wakefield and south of Castleford. Historically part of the West Riding of Yorkshire, it is one of the towns in the City of Wakefield District and had a population of 30,881 at the 2011 Census. Pontefract's motto is Post mortem patris pro filio, Latin for "After the death of the father, support the son", a reference to the town's Royalist sympathies in the English Civil War.

At the end of the 11th century, the modern township of Pontefract consisted of two distinct and separate localities known as Tanshelf and Kirkby. The 11th-century historian, Orderic Vitalis, recorded that, in 1069, William the Conqueror travelled across Yorkshire to put down an uprising which had sacked York, but that, upon his journey to the city, he discovered that the crossing of the River Aire at what is modern-day Pontefract had been blockaded by a group of local Anglo-Scandinavian insurgents, who had broken the bridge and held the opposite bank in force. Such a crossing point would have been important in the town's early days, providing access between Pontefract and other settlements to the north and east, such as York. Historians believe that it is this historical event which gives the township of Pontefract its modern name. The name "Pontefract" originates from the Latin for "broken bridge", formed of the elements pons ('bridge') and fractus ('broken'). Pontefract was not recorded in the 1086 Domesday Book, but it was noted as Pontefracto in 1090, four years after the Domesday survey.

The above introduction to Pontefract uses material from the Wikipedia article 'Pontefract' and is used under licence.

Weather forecast for the next three days for Pontefract 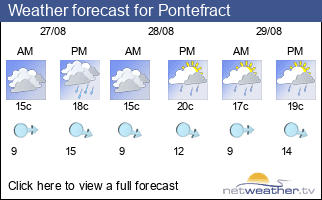