We have searched for business suppliers in Porthmadog, Gwynedd a town with an approximate population of 2,981 , that at the census in 2011 had a working population (aged between 16 and 74) of 1,341 people in work, and have found 2 suppliers of services such as Wall Art, & Accountants in Porthmadog and have listed them below, we hope to add more in the near future.

If you know of any more suppliers of business related services, either matching the list of 2 services we already have or new services, in Porthmadog that you can recommend please contact us and we will look at adding them to this page.

A Quarter Of - the old fashioned sweetshop on the Internet!, reward your staff or business clients with the taste and memories of their youth. From individual packs of sweets to mixed gift boxes. (Last Checked : 2020-10-24 10:34)

Not found what you are looking for in Porthmadog? We have other listings in locations such as Pwllheli, Criccieth & Bala that you may find helpful.

Porthmadog (/pɔːrθˈmædɒɡ/; Welsh pronunciation: [pɔrθˈmadoɡ]), known before 1974 in its anglicised form of Portmadoc and locally as "Port", is a Welsh coastal town and community in the Eifionydd area of Gwynedd. Before the 1974 reorganisation it was in the historic county of Caernarfonshire. It lies 5 miles (8 km) east of Criccieth, 11 miles (18 km) south-west of Blaenau Ffestiniog, 25 miles (40 km) north of Dolgellau and 20 miles (32 km) south of Caernarfon. The community population was 4,185 in the 2011 census and an estimated 4,107 in 2018. It developed in the 19th century as a port for slate sent to England and elsewhere, but as the industry declined, it continued as a shopping centre and tourist destination, being close to Snowdonia National Park and the Ffestiniog Railway. The 1987 National Eisteddfod was held there. It includes the nearby villages of Borth-y-Gest, Morfa Bychan and Tremadog.

Porthmadog came about after William Madocks built a sea wall, the Cob, in 1808–1811 to reclaim much of Traeth Mawr from the sea for farming use. Diversion of the Afon Glaslyn caused it to scour out a new natural harbour deep enough for small ocean-going sailing ships, and the first public wharves appeared in 1825. Quarry companies followed, with wharves along the shore almost to Borth-y-Gest, while slate was carted from Ffestiniog down to quays along the Afon Dwyryd, then boated to Porthmadog for transfer to seagoing vessels.

The above introduction to Porthmadog uses material from the Wikipedia article 'Porthmadog' and is used under licence.

Weather forecast for the next three days for Porthmadog 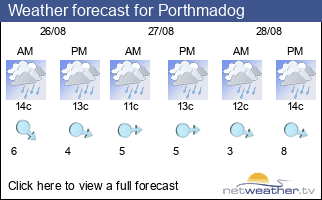