We have searched for business suppliers in Portsmouth, Hampshire a city with an approximate population of 238,137 , that at the census in 2011 had a working population (aged between 16 and 74) of 113,075 people in work, and have found 7 suppliers of services such as Wall Art, Business Gifts , Accountants & Local Authority in Portsmouth and have listed them below split into the type of service that they provide.

If you know of any more suppliers of business related services, either matching the list of 4 services we already have or new services, in Portsmouth that you can recommend please contact us and we will look at adding them to this page.

Leonard Gold
Leonard Gold Chartered Accountants was established in Portsmouth in 1960 and has grown since to provide a range of high quality accountancy and bookkeeping services as well as independent financial advice ( Last Checked/Updated : 2021-09-18 00:01:01)

Curtis-Williams
Accountants in Portsmouth, Hampshire. Curtis-Williams are a local independent Practice providing a range of personal services in respect of accountancy, taxation and bookkeeping. ( Last Checked/Updated : 2021-05-09 12:01:01)

A Quarter Of - the old fashioned sweetshop on the Internet!, reward your staff or business clients with the taste and memories of their youth. From individual packs of sweets to mixed gift boxes. (Last Checked : 2021-10-28 02:15)

Not found what you are looking for in Portsmouth? We have other listings in locations such as Ashton, Preston, Leyland, Mill Hill, Blackburn, Darwen, Accrington, Eastwood, Sowerby Bridge, Wheatley, Halifax, Brighouse, Clifton, Cleckheaton, Batley & Beeston that you may find helpful.

Portsmouth (/ˈpɔːrtsməθ/ (listen)) is a port city in the ceremonial county of Hampshire on the south coast of England. Located mainly on Portsea Island, 70 miles (110 km) south-west of London and 19 miles (31 km) south-east of Southampton, it is the United Kingdom's only island city. It has a population of 238,800, and is the only city in the British Isles with a greater population density than London. The city forms part of the South Hampshire built-up area, which also covers Southampton and the towns of Havant, Waterlooville, Eastleigh, Fareham, and Gosport.

The city's history can be traced to Roman times. A significant naval port for centuries, Portsmouth has the world's oldest dry dock and was England's first line of defence during the French invasion in 1545. Special Palmerston Forts were built in 1859 in anticipation of another invasion from continental Europe. By the early-19th century, Portsmouth was the most heavily fortified city in the world, and was considered "the world's greatest naval port" at the height of the British Empire throughout Pax Britannica. The world's first mass production line was set up in the city, making it the most industrialised site in the world. During the Second World War, the city was a pivotal embarkation point for the D-Day landings and was bombed extensively in the Portsmouth Blitz, which resulted in the deaths of 930 people. In 1982, the city housed the entirety of the attacking forces in the Falklands War. Her Majesty's Yacht Britannia left the city to oversee the transfer of Hong Kong in 1997, which marked for many the end of the empire.

The above introduction to Portsmouth uses material from the Wikipedia article 'Portsmouth' and is used under licence.

Weather forecast for the next three days for Portsmouth 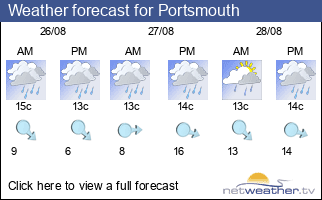