We have searched for business suppliers in Redditch, Worcestershire a town with an approximate population of 81,919 , that at the census in 2011 had a working population (aged between 16 and 74) of 41,779 people in work, and have found 7 suppliers of services such as Wall Art, , Accountants & Local Authority in Redditch and have listed them below split into the type of service that they provide.

If you know of any more suppliers of business related services, either matching the list of 3 services we already have or new services, in Redditch that you can recommend please contact us and we will look at adding them to this page.

Rudge & Co.
Based at Greenlands Business Centre, Redditch, we have traded as accountants for over forty five years and have considerable knowledge and experience of general practice.

Hayward Wright Ltd
Hayward Wright pride themselves on providing both traditional accountancy along with a wide range of value-added services. We have a strong presence in Redditch, Bromsgrove, Stratford, Worcester and the wider Midlands

Local Authority based in Redditch

John Mitchell - Photo4Me
Wall art suitable for interior design and office receptions, available online and shipped to Redditch. Printed to order on canvas, acrylic and other surfaces with 30 day guarantee.

Not found what you are looking for in Redditch? We have other listings in locations such as Droitwich, Bromsgrove, Kingswood, Warwick, Kenilworth & Leamington Spa that you may find helpful.

Redditch is a town, and local government district in north-east Worcestershire, England, approximately 15 miles (24 km) south of Birmingham. The district has a population of 110,000 as of 2019. In the 19th century it became the international centre for the needle and fishing tackle industry. At one point 90% of the world's needles were manufactured in the town and its neighbourhoods. In the 1960s it became a model for modern new town planning.

The first recorded mention of Redditch (Red-Ditch, thought to be a reference to the red clay of the nearby River Arrow) is in 1348, the year of the outbreak of the Black Death. During the Middle Ages it became a centre of needle-making and later prominent industries were fish-hooks, fishing tackle, motorcycles and springs, the last of which was notably undertaken by Herbert Terry and Sons. Redditch was designated a new town on 10 April 1964, and the population increased dramatically[when?] from 32,000 to around 77,000. Housing developments such as Church Hill, Matchborough, Winyates, Lodge Park and Woodrow were created to accommodate a large overspill from the industrially expanding Birmingham. Redditch was built as a "flagship" town using new methods and new town planning: all the main roads (mostly new dual carriageways as well as a ring road for the town centre) were banked to reduce noise to the new housing estates, and the whole of Redditch was landscaped.

The above introduction to Redditch uses material from the Wikipedia article 'Redditch' and is used under licence.

Weather forecast for the next three days for Redditch 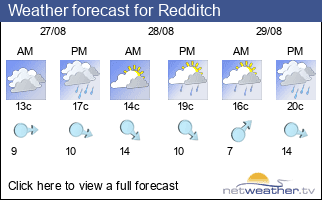