We have searched for business suppliers in Redruth, Cornwall a town with an approximate population of 19,902 , that at the census in 2011 had a working population (aged between 16 and 74) of 18,967 people in work, and have found 3 suppliers of services such as Wall Art, , Accountants & Tool Suppliers in Redruth and have listed them below split into the type of service that they provide.

If you know of any more suppliers of business related services, either matching the list of 3 services we already have or new services, in Redruth that you can recommend please contact us and we will look at adding them to this page.

Walker Moyle
Walker Moyle's roots date back to 1925, making us one of the most long-established accountancy practices in West Cornwall. We have offices in Penzance, Redruth and St. Ives, with the majority of our clients based in Cornwall.

John Mitchell - Photo4Me
Wall art suitable for interior design and office receptions, available online and shipped to Redruth. Printed to order on canvas, acrylic and other surfaces with 30 day guarantee.

Not found what you are looking for in Redruth? We have other listings in locations such as St Ives & Truro that you may find helpful.

Redruth (/rəˈdruːθ/ rə-DROOTH, Cornish: Resrudh) is a town and civil parish in Cornwall, England, United Kingdom. The population of Redruth was 14,018 at the 2011 census. In the same year the population of the Camborne-Redruth urban area, which also includes Carn Brea, Illogan and several satellite villages, stood at 55,400 making it the largest conurbation in Cornwall. Redruth lies approximately at the junction of the A393 and A3047 roads, on the route of the old London to Land's End trunk road (now the A30), and is approximately 9 miles (14 km) west of Truro, 12 miles (19 km) east of St Ives, 18 miles (29 km) north east of Penzance and 11 miles (18 km) north west of Falmouth. Camborne and Redruth together form the largest urban area in Cornwall and before local government reorganisation were an urban district.

The above introduction to Redruth uses material from the Wikipedia article 'Redruth' and is used under licence.

Weather forecast for the next three days for Redruth 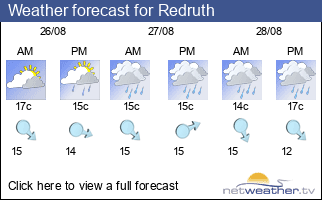