We have searched for business suppliers in Rhondda, Rhondda Cynon Taf a town with an approximate population of 13,333 , that at the census in 2011 had a working population (aged between 16 and 74) of 5,431 people in work, and have found 2 suppliers of services such as Wall Art, & Accountants in Rhondda and have listed them below, we hope to add more in the near future.

If you know of any more suppliers of business related services, either matching the list of 2 services we already have or new services, in Rhondda that you can recommend please contact us and we will look at adding them to this page.

Young and Phillips Ltd
We have been serving clients in the South Wales area for over 30 years from our offices in Treorchy in the Rhondda. We concentrate our services on individuals, professional partnerships and small to medium sized business.

John Mitchell - Photo4Me
Wall art suitable for interior design and office receptions, available online and shipped to Rhondda. Printed to order on canvas, acrylic and other surfaces with 30 day guarantee.

Not found what you are looking for in Rhondda? We have other listings in locations such as Swansea, Nelson & Cwmbran that you may find helpful.

Rhondda /ˈrɒnðə/, or the Rhondda Valley (Welsh: Cwm Rhondda [kʊm ˈr̥ɔnða]), is a former coal mining area in South Wales, previously in Glamorgan, and now a local government district, of 16 communities around the River Rhondda. The Rhondda is actually two valleys – the larger Rhondda Fawr valley (mawr large) and the smaller Rhondda Fach valley (bach small) – so that the singular "Rhondda Valley" and the plural are both commonly used. In 2001, the Rhondda constituency of the National Assembly for Wales had a population of 72,443; while the National Office of Statistics counted the population as 59,602. Rhondda forms part of Rhondda Cynon Taf County Borough and of the South Wales Valleys. It is most noted for its historical coal-mining industry, which peaked between 1840 and 1925. The valleys produced a strong early Nonconformist Christian movement manifest in the Baptist chapels that moulded Rhondda values in the 19th and early 20th centuries. It is also famous for strong masculine cultural ties exemplified in its male voice choirs, sport and politics.

The larger of the two valleys, the Rhondda Fawr, extends from Porth and rises through the valley until it reaches Blaenrhondda, near Treherbert. The settlements that make up the Rhondda Fawr are as follows:

The above introduction to Rhondda uses material from the Wikipedia article 'Rhondda' and is used under licence.

Weather forecast for the next three days for Rhondda 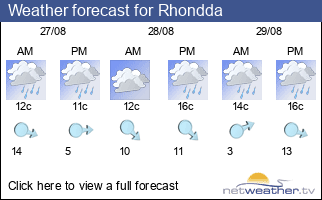