We have searched for business suppliers in Rye, East Sussex a town with an approximate population of 4,773 , that at the census in 2011 had a working population (aged between 16 and 74) of 2,124 people in work, and have found 2 suppliers of services such as Wall Art, & Accountants in Rye and have listed them below, we hope to add more in the near future.

If you know of any more suppliers of business related services, either matching the list of 2 services we already have or new services, in Rye that you can recommend please contact us and we will look at adding them to this page.

Gibbons Mannington & Phipps
GMP is a firm of chartered accoutants based in Rye, Bexhill and Tenterden. Our aim is to provide the highest standards of professional service and advice to all.

John Mitchell - Photo4Me
Wall art suitable for interior design and office receptions, available online and shipped to Rye. Printed to order on canvas, acrylic and other surfaces with 30 day guarantee.

Not found what you are looking for in Rye? We have other listings in locations such as Heathfield & Battle that you may find helpful.

Rye is a small town and civil parish in the Rother district, in East Sussex, England, two miles from the sea at the confluence of three rivers: the Rother, the Tillingham and the Brede. In medieval times, as an important member of the Cinque Ports confederation, it was at the head of an embayment of the English Channel, and almost entirely surrounded by the sea.

At the 2011 census, Rye had a population of 4,773. Its historical association with the sea has included providing ships for the service of the Crown in time of war, and being involved in smuggling. The notorious Hawkhurst Gang used its ancient inns The Mermaid Inn and The Olde Bell Inn, which are said to be connected to each other by a secret passageway.

The above introduction to Rye uses material from the Wikipedia article 'Rye' and is used under licence.

Weather forecast for the next three days for Rye 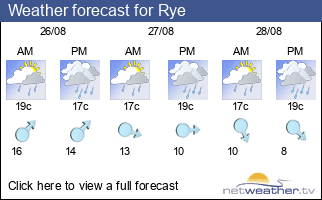