We have searched for business suppliers in Sleaford, Lincolnshire a town with an approximate population of 17,359 , that at the census in 2011 had a working population (aged between 16 and 74) of 8,601 people in work, and have found 3 suppliers of services such as Wall Art, Business Gifts , Accountants & Local Authority in Sleaford and have listed them below split into the type of service that they provide.

If you know of any more suppliers of business related services, either matching the list of 4 services we already have or new services, in Sleaford that you can recommend please contact us and we will look at adding them to this page.

Dexter & Shape
Dexter & Sharpe are based in market towns throughout the heart of Lincolnshire, we provide a trusted source of expertise whether you are an individual, start up or a well established business. ( Last Checked/Updated : 2022-02-12 04:49:01)

A Quarter Of - the old fashioned sweetshop on the Internet!, reward your staff or business clients with the taste and memories of their youth. From individual packs of sweets to mixed gift boxes. (Last Checked : 2022-05-24 14:12)

Sleaford is a market town and civil parish in the North Kesteven district of Lincolnshire, England, which includes Quarrington to the south-west, Holdingham to the north and Old Sleaford to the east. The town is on the edge of the fertile Fenlands, 11 miles (18 kilometres) north-east of Grantham, 16 mi (26 km) west of Boston, and 17 mi (27 km) south of Lincoln. Its population of 17,671 at the 2011 Census made it the largest settlement in the North Kesteven district. Bypassed by the A17 and the A15, it is linked to Lincoln, Newark, Peterborough and King's Lynn. Sleaford railway station is on the Nottingham to Skegness (via Grantham) and Peterborough to Lincoln Lines.

The first settlement formed in the Iron Age where a prehistoric track crossed the River Slea. It was a tribal centre and home to a mint for the Corieltauvi in the 1st centuries BC and AD. Evidence of Roman and Anglo-Saxon settlement has been found. The medieval records differentiate between Old and New Sleaford, the latter emerging by the 12th century around the present-day market place and St Denys' Church; Sleaford Castle was also built at that time for the Bishops of Lincoln, who owned the manor. Granted the right to hold a market in the mid-12th century, New Sleaford developed into a market town and became locally important in the wool trade, while Old Sleaford declined.

The above introduction to Sleaford uses material from the Wikipedia article 'Sleaford' and is used under licence.

Weather forecast for the next three days for Sleaford 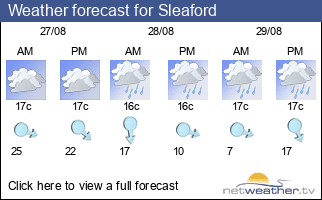