We have searched for business suppliers in Soho, London , and have found 4 suppliers of services such as Wall Art, Business Gifts , Accountants, Advertising Agency & Local Authority in Soho and have listed them below split into the type of service that they provide.

If you know of any more suppliers of business related services, either matching the list of 5 services we already have or new services, in Soho that you can recommend please contact us and we will look at adding them to this page.

Brebners
Brebners is a firm of chartered accountants and business advisers based in Soho, London and Sevenoaks. We provide accountancy, tax and compliance services to businesses and individuals across the UK. We are specialists in a range of sectors, including the media, sporting and creative professions. ( Last Checked/Updated : 2021-11-20 18:01:01)

Soho Media Group
Soho Media Group is a unique multi-award winning creative and media agency, which services the worldwide entertainment, sport and leisure industries, based in the heart of London's West-End. ( Last Checked/Updated : 2021-11-28 00:01:01)

Local Authority based in Soho

A Quarter Of - the old fashioned sweetshop on the Internet!, reward your staff or business clients with the taste and memories of their youth. From individual packs of sweets to mixed gift boxes. (Last Checked : 2022-05-25 01:25)

Soho is an area of the City of Westminster, part of the West End of London. Originally a fashionable district for the aristocracy, it has been one of the main entertainment districts in the capital since the 19th century.

The area was developed from farmland by Henry VIII in 1536, when it became a royal park. It became a parish in its own right in the late 17th century, when buildings started to be developed for the upper class, including the laying out of Soho Square in the 1680s. St Anne's Church was established during the late 17th century, and remains a significant local landmark; other churches are the Church of Our Lady of the Assumption and St Gregory and St Patrick's Church in Soho Square. The aristocracy had mostly moved away by the mid-19th century, when Soho was particularly badly hit by an outbreak of cholera in 1854. For much of the 20th century Soho had a reputation as a base for the sex industry in addition to its night life and its location for the headquarters of leading film companies. Since the 1980s, the area has undergone considerable gentrification. It is now predominantly a fashionable district of upmarket restaurants and media offices, with only a small remnant of sex industry venues. London's gay community is centred on Old Compton Street in Soho.

The above introduction to Soho uses material from the Wikipedia article 'Soho' and is used under licence.

Weather forecast for the next three days for Soho 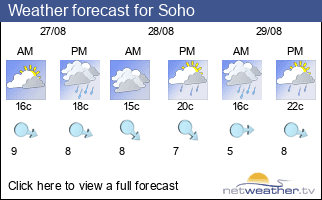