We have searched for business suppliers in Thrapston, Northants a town with an approximate population of 6,239 , that at the census in 2011 had a working population (aged between 16 and 74) of 3,726 people in work, and have found 2 suppliers of services such as Wall Art, & Local Authority in Thrapston and have listed them below, we hope to add more in the near future.

If you know of any more suppliers of business related services, either matching the list of 2 services we already have or new services, in Thrapston that you can recommend please contact us and we will look at adding them to this page.

John Mitchell - Photo4Me
Wall art suitable for interior design and office receptions, available online and shipped to Thrapston. Printed to order on canvas, acrylic and other surfaces with 30 day guarantee.

Not found what you are looking for in Thrapston? We have other listings in locations such as Kettering that you may find helpful.

Thrapston is an industrial town in Northamptonshire, England. It is the headquarters of the East Northamptonshire district, and at the time of the 2011 census, had a population of 6,239.

Thrapston is situated close to the River Nene and is at the junction of the A14 and the A45. Until the 1960s, Thrapston had two railway stations. Thrapston (Midland) was on the Kettering to Cambridge route, and the former station and viaduct can be seen from the adjacent A14 road. Thrapston (Bridge Street) was on the former LNWR Northampton to Peterborough line.

The above introduction to Thrapston uses material from the Wikipedia article 'Thrapston' and is used under licence.

Weather forecast for the next three days for Thrapston 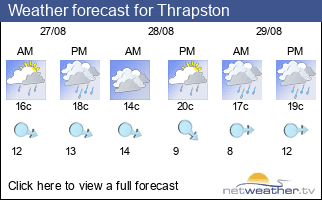