We have searched for business suppliers in Tywyn, Gwynnedd a town with an approximate population of 3,097 , that at the census in 2011 had a working population (aged between 16 and 74) of 1,201 people in work, and have found 2 suppliers of services such as Wall Art, & Accountants in Tywyn and have listed them below, we hope to add more in the near future.

If you know of any more suppliers of business related services, either matching the list of 2 services we already have or new services, in Tywyn that you can recommend please contact us and we will look at adding them to this page.

Davies Lewis Baker
We are a two partner accountancy practice based in the west Wales coastal town of Aberystwyth, with offices in the Mid-Wales town of Llanidloes and coastal town of Tywyn, Gwynedd. ( Last Checked/Updated : 2019-06-23 01:17:01)

A Quarter Of - the old fashioned sweetshop on the Internet!, reward your staff or business clients with the taste and memories of their youth. From individual packs of sweets to mixed gift boxes. (Last Checked : 2020-08-09 21:25)

Tywyn (Welsh: [ˈtəʊ.ᵻn]; in English often /ˈtaʊ.ɪn/), formerly spelled Towyn, is a town, community, and seaside resort on the Cardigan Bay coast of southern Gwynedd, Wales. It was previously in the historic county of Merionethshire. It is famous as the location of the Cadfan Stone, a stone cross with the earliest known example of written Welsh, and the home of the Talyllyn Railway.

The name derives from the Welsh tywyn ("beach, seashore, sand-dune"): extensive sand dunes are still to be found to the north and south of the town. In Middle Welsh, the spelling was generally Tywyn. In the Early Modern period, however, the spelling Towyn became common in Welsh in order to reflect a slight change in pronunciation at that time. That also came to be the usual spelling in English up to the latter part of the twentieth century. The modern spelling Tywyn better reflects the current pronunciation in modern Welsh as spoken in north Wales. With the standardisation of the orthography of the Welsh language in the first part of the 20th century, the spelling Tywyn came to dominate, and was accepted as the official name of the town in both languages in the 1970s. In Welsh, the town is sometimes referred to as Tywyn Meirionnydd. In origin, this usage probably refers to the cantref of Meirionnydd, but is now generally understood as referring to the historical county of the same name. In English, during the late 19th century and until the middle of the 20th century, the town was sometimes called Towyn-on-Sea. The place-name element tywyn is found in many other parts of Wales, most notably Towyn near Abergele.

The above introduction to Tywyn uses material from the Wikipedia article 'Tywyn' and is used under licence.

Weather forecast for the next three days for Tywyn 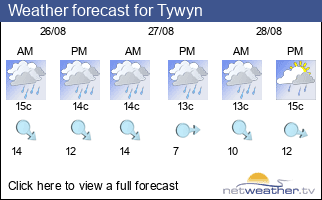