We have searched for business suppliers in Windermere, Cumbria a town with an approximate population of 5,243 , that at the census in 2011 had a working population (aged between 16 and 74) of 3,971 people in work, and have found 2 suppliers of services such as Wall Art, Business Gifts & Accountants in Windermere and have listed them below, we hope to add more in the near future.

If you know of any more suppliers of business related services, either matching the list of 3 services we already have or new services, in Windermere that you can recommend please contact us and we will look at adding them to this page.

A Quarter Of - the old fashioned sweetshop on the Internet!, reward your staff or business clients with the taste and memories of their youth. From individual packs of sweets to mixed gift boxes. (Last Checked : 2021-10-20 11:04)

The word 'Windermere' is thought to translate as "'Winand or Vinand's lake'... The specific has usually been identified with an Old Swedish personal name 'Vinandr', genitive singular 'Vinandar'"... although "the personal noun is of very restricted distribution even in Sweden." Another possibility is that it refers to a "Continental Germanic personal noun, 'Wīnand'...Since this name could not have been current until the 12th century, the fact that the Old Norse genitive singular '-ar-' has been added to it, it would suggest that Old Norse was still a living language in the area at that time." Alternative spellings may be 'Wynhendermere' and 'Wynenderme' The second element is Old English 'mere', meaning 'lake' or 'pool'. It was known as "Winander Mere" or "Winandermere" until at least the 19th century.

Its name suggests it is a mere, a lake that is broad in relation to its depth, but despite the name this is not the case for Windermere, which in particular has a noticeable thermocline, distinguishing it from typical meres. Until the 19th century, the term "lake" was, indeed, not much used by or known to the native inhabitants of the area, who referred to it as Windermere/Winandermere Water, or (in their dialect) Windermer Watter. The name Windermere or Windermer was used of the parish that had clearly taken its name from the water. The poet Norman Nicholson comments on the use of the phrase 'Lake Windermere': "a certain excuse for the tautology can be made in the case of Windermere, since we need to differentiate between the lake and the town, though it would be better to speak of 'Windermere Lake' and Windermere Town', but no one can excuse such ridiculous clumsiness as 'Lake Derwentwater' and 'Lake Ullswater."

The above introduction to Windermere uses material from the Wikipedia article 'Windermere' and is used under licence.

Weather forecast for the next three days for Windermere 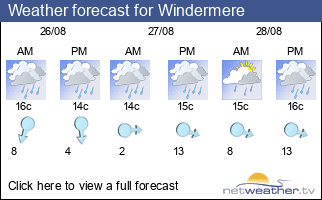