We have searched for business suppliers in Woolwich, London , and have found 3 suppliers of services such as Wall Art, , Cash and Carry & Local Authority in Woolwich and have listed them below split into the type of service that they provide.

If you know of any more suppliers of business related services, either matching the list of 3 services we already have or new services, in Woolwich that you can recommend please contact us and we will look at adding them to this page.

John Mitchell - Photo4Me
Wall art suitable for interior design and office receptions, available online and shipped to Woolwich. Printed to order on canvas, acrylic and other surfaces with 30 day guarantee.

Woolwich (/ˈwʊlɪtʃ, -ɪdʒ/) is a district of southeast London, England, within the Royal Borough of Greenwich. It has been part of the London metropolitan area since the 19th century. In 1965, most of the former Metropolitan Borough of Woolwich became part of Greenwich Borough, of which it remains the administrative centre. The population of Woolwich (including its localities Plumstead and Shooter's Hill) was 84,959 in the 2011 census.

The town is a river crossing point, with the Woolwich Ferry and the Woolwich foot tunnel crossing to North Woolwich in the London Docklands. Throughout the 17th, 18th, 19th and most of the 20th century, Woolwich was an important naval, military and industrial town. After several decades of economic hardship and social deprivation, large-scale urban renewal projects have turned its fortunes around. It is expected that the town, identified in the London Plan as "opportunity area", will evolve from "major centre" to "metropolitan centre" within Greater London in the next few decades.

The above introduction to Woolwich uses material from the Wikipedia article 'Woolwich' and is used under licence.

Weather forecast for the next three days for Woolwich 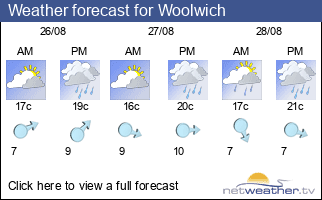