We have searched for business suppliers in York, North Yorkshire a city with an approximate population of 152,841 , that at the census in 2011 had a working population (aged between 16 and 74) of 77,122 people in work, and have found 9 suppliers of services such as Wall Art, , Accountants, Local Authority, Mailbox Rental & Tool Suppliers in York and have listed them below split into the type of service that they provide.

If you know of any more suppliers of business related services, either matching the list of 5 services we already have or new services, in York that you can recommend please contact us and we will look at adding them to this page.

HPH Chartered Accountants
At HPH, we work with a wide range of clients, including private individuals, businesses and not-for-profit organisations, as well as a number of specialist sectors.

Spencer Woods Ltd
The team here at Spencer Woods pride themselves on their ability to supply individual, swift accounting advice and support on a range of accounting issues.

Jones and Co
As a firm that has been involved with business start-ups and is the author of the Business Start-Up Checklist published by Accountancy Books, we are used to looking to the future. Although we are a small firm we have access to outside expertise where required.

J W P Creers
JWPCreers are a firm of proactive Chartered Accountants and Business Advisers with offices in York and Selby.

Mail Boxes Etc
Whether you're looking for worldwide parcel delivery, courier or postal services; print and copy; mailbox rental or a virtual office package, you can trust the team at Mail Boxes Etc

John Mitchell - Photo4Me
Wall art suitable for interior design and office receptions, available online and shipped to York. Printed to order on canvas, acrylic and other surfaces with 30 day guarantee.

Not found what you are looking for in York? We have other listings in locations such as Blackpool, Preston, Great Harwood, Burnley & Nelson that you may find helpful.

York is a cathedral city and unitary authority area in North Yorkshire, England. The population of the council area which includes nearby villages was 208,200 as of 2017 and the population of the urban area was 153,717 at the 2011 census. Located at the confluence of the Rivers Ouse and Foss, it is the county town of the historic county of Yorkshire. The city is known for its famous historical landmarks such as York Minster and the city walls, as well as a variety of cultural and sporting activities, which makes it a popular tourist destination in England. The local authority is the City of York Council, a single tier governing body responsible for providing all local services and facilities throughout the city. The City of York local government district includes rural areas beyond the old city boundaries. It is about 25 miles north-east of Leeds and 34 miles north-west of Kingston upon Hull. York is the largest settlement in the ceremonial county of North Yorkshire.

The city was founded by the Romans as Eboracum in 71 AD. It became the capital of the Roman province of Britannia Inferior, and later of the kingdoms of Deira, Northumbria and Jórvík. In the Middle Ages, York grew as a major wool trading centre and became the capital of the northern ecclesiastical province of the Church of England, a role it has retained. In the 19th century, York became a major hub of the railway network and a confectionery manufacturing centre, a status it maintained well into the 20th century. During the Second World War, York was bombed as part of the Baedeker Blitz. Although less affected by bombing than other northern cities, several historic buildings were gutted and restoration efforts continued into the 1960s.

The above introduction to York uses material from the Wikipedia article 'York' and is used under licence.

Weather forecast for the next three days for York 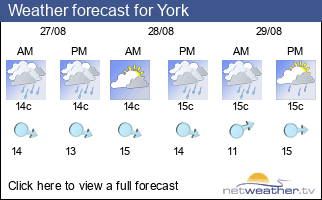